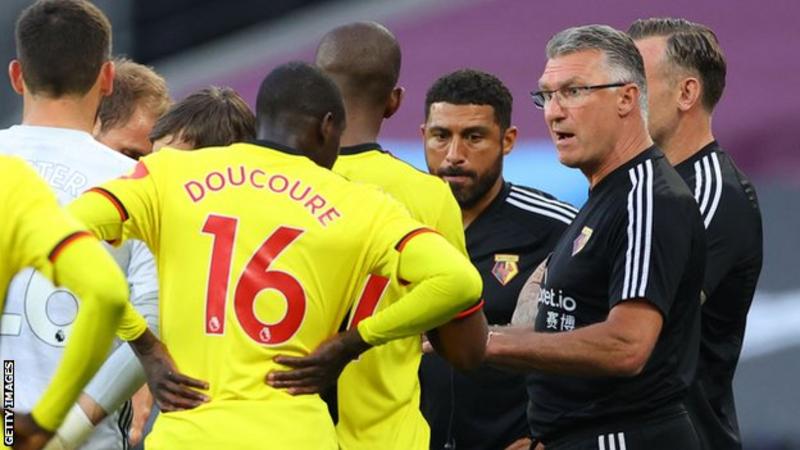 Nigel Pearson says he has been “overwhelmed” by messages of support since being sacked as Watford manager.

Pearson was appointed in December but dismissed on Sunday with Watford in 17th position in the Premier League, three points above the relegation zone.

Under-23s coach Hayden Mullins has been placed in temporary charge for the final two league games of the season.

“Although not able to finish the task I was brought in to achieve, I wish Watford all the best,” Pearson tweeted.

“I’ve been overwhelmed by the well wishes I’ve received from Watford supporters and the football community. Thank you all for your kind messages.”

Watford were bottom of the Premier League with just one win in 15 matches when Pearson was appointed on a deal until the end of the season.

The club is now searching for its 13th permanent manager since Sean Dyche took charge nine years ago.

Under Pearson, Watford won seven games in the Premier League, but the Hornets were soundly beaten by West Ham on Friday.

Their final two games of the season are a trip to Manchester City and the visit of Arsenal.

The club is expected to hold a news conference at 15:00 BST on Monday.

Interim boss Hayden Mullins will speak at Monday’s news conference but it is yet to be decided if a club executive will also be present to explain the thinking behind Nigel Pearson’s shock dismissal.

BBC Sport understands the decision was not purely down to Watford’s first-half performance at West Ham on Friday.

The Hornets were 3-0 down but this was the latest in a series of dismal first-half displays. At no point since the Premier League resumed have Watford scored first in a game. Their two victories – against Norwich and Newcastle – were both comebacks.

The performance against Southampton on 28 June, when Watford lost 3-1 at Vicarage Road, was so poor there was a theory Pearson could have been replaced then.

Mullins will be in charge for the final two games against Manchester City and Arsenal, but it is understood he has no chance of getting the job full-time.

Related posts:
Jazmin Grimaldi has tested positive for coronavirus
Catherine Zeta Jones’ lookalike daughter Carys, 17, wows in cream silk dress and is the ‘spitting image’ of actress – The Sun
Popular News
Secret witnesses to testify about plot to ‘kidnap or poison’ Assange
30/09/2020
Stuart Broad builds up to second Virtual Test with Sri Lanka
26/03/2020
Bindi Irwin Made Last-Minute Changes to Her Wedding Due to Coronavirus Lockdown
26/03/2020
Widow on The Repair Shop leaves viewers sobbing
26/03/2020
Coronavirus lockdown: Global quarantine reveals weird fact about humanity
26/03/2020
Recent Posts
This website uses cookies to improve your user experience and to provide you with advertisements that are relevant to your interests. By continuing to browse the site you are agreeing to our use of cookies.Ok