Newcastle Jets kept their slim finals hopes alive and dented Western United's play-off aspirations when they got the better of a tight, taut and competitive fixture in the Hunter Valley on Sunday night.

Roy O'Donovan's first half header was enough to separate the teams, giving Carl Robinson's side a priceless 1-0 win. 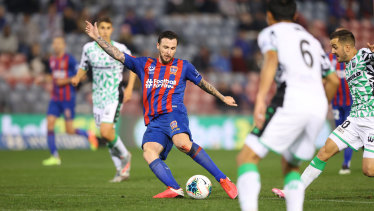 Sharp shooter: Roy O’Donovan of the Jets finds space to line up a shot on Western United’s goal at McDonald Jones Stadium in Newcastle.Credit:Getty Images

The victory lifts the Jets up to seventh position with 31 points, but they only have one game remaining. Western United is eighth, with 30 points, but Mark Rudan's side still have four matches to play.

The Jets need to win their final match and hope that Perth and Adelaide suffer a collapse in form. Western still has it's destiny in it's own hands, but can ill afford too many more slip ups.

The Jets, with their season on the line, came out of the blocks quickly as they looked to impose themselves on the visitors right from the outset, pinging the ball around crisply, their midfielders and forwards looking to exert pressure and find early gaps to exploit in the Western rearguard. 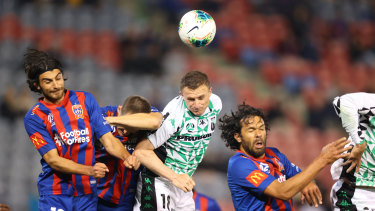 Using his head: Besart Berisha gets the best of an aerial contest for Western United.Credit:Getty Images

But it was the visitors, through the lively Max Burgess, who had the first significant effort on goal, the Western forward jinking around a couple of challenges on the edge of the area before firing off a shot that forced Jets goalkeeper Lewis Italiano into a diving save.

Western's veteran defender Andrew Durante – who earlier in his career had captained Newcastle to a grand final victory as long ago as 2008 – showed he still had plenty of pace when he got back sharply to intercept and deny Jets striker Roy O'Donovan and prevent him getting a shot on target.

Shortly afterwards O'Donovan drew the anger of the Western players – and looked lucky to avoid a card of one colour or other – when he clashed with Durante and appeared to elbow him in the head as the two chased down a through ball.

Italiano put his team under pressure with a poor pass out from the back which was intercepted by Josh Risdon. The Socceroo fullback set up Alessandro Diamanti and the former Italian international drove into the penalty area, his shot deflected to safety by Nikolai Topor Stanley. 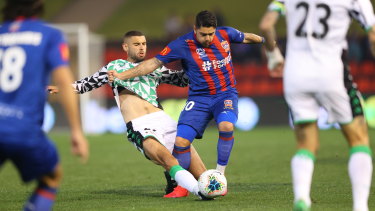 Sebastian Pasquali then shot over for Western while Burgess continued to run at defenders and dribble, seeking to break the lines and create space for his team mates.

Western looked threatening once again when Diamanti played a beautiful cross field pass to defender Conor Pain, the full back creating space before driving a shot which Italiano dived to parry wide.

The Jets were, however, giving as good as they got and it was the hosts who got their noses in front in the 29th minute through O'Donovan, who capped off an excellent Newcastle move.

Bernie Ibini found Jason Hoffman wide on the right with a well weighted pass, the full back floating a cross into the area which O'Donovan reached before Durante to direct a glancing header past Filip Kurto in the Western goal.

Western thought they had got back on level terms just after the half hour mark when Besart Berisha slickly converted a Connor Pain cross only for his effort to be ruled out after he had strayed offside in the build up.

The Jets had a gilt edged opportunity to double their advantage early in the second half when Hoffman rose to meet a John Koutroumbis cross only to power his header over the bar.

Both coaches rang the changes from an expanded bench, and it was two Jets substitutes, first Dimi Petratos, then another, Abdiel Arroya, who drove over and wide as the hosts looked to put clear air between themselves and their opponents.

Berisha and Jets captain Nigel Boogard had been skirmishing all evening and the niggle rose to another level 20 minutes from time when the pair clashed and Boogard was booked after he sent Berisha sprawling.

Diamanti made way for Valentino Yuel with 16 minutes left as Western coach Mark Rudan looked to vary his attacking options.

The Jets then made some history of their own when Kosta and Maki Petratos came off the bench to join Dimi – only the third time in the Australian game's history that three brothers have played in the same game. Maki almost made it a night of even greater moment when he burst through only to see his shot well saved by Kurto.

Related posts:
Housing Secretary insists bars will stay open
Wilford Brimley, 'Cocoon' and 'Natural' actor, dies at 85
Popular News
Watch ex-Man Utd star Herrera score a screamer after incredible Neymar assist ahead of PSG's clash with Atalanta
09/08/2020
Stuart Broad builds up to second Virtual Test with Sri Lanka
26/03/2020
Bindi Irwin Made Last-Minute Changes to Her Wedding Due to Coronavirus Lockdown
26/03/2020
Widow on The Repair Shop leaves viewers sobbing
26/03/2020
Coronavirus lockdown: Global quarantine reveals weird fact about humanity
26/03/2020
Recent Posts
This website uses cookies to improve your user experience and to provide you with advertisements that are relevant to your interests. By continuing to browse the site you are agreeing to our use of cookies.Ok