A two-time winner of the Moran Portrait Prize, Les Rice had not contemplated entering the Archibald Prize this year until the shutdown that forced the Art Gallery of NSW to postpone its entry deadline.

The arrival of COVID-19 capped off a "weird f—ing year" for Rice, one that started after a fire gutted his tattoo parlour in Newtown in Sydney's inner west. 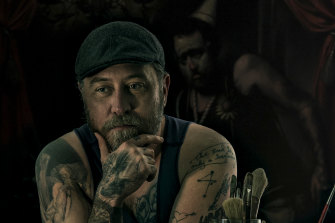 He gave up the tattoo game as a result, took a couple of small acting roles playing bad-ass characters including Gary Sweet's henchman in Mystery Road, and only as the crisis deepened did it occur that not only did he have time to enter but he had an idea he could prosecute on canvas.

After pulling The Hangman during a friend's playful tarot card reading, he began to plan. On the same day he enrolled in the doctorate program at the National Art School where he is a lecturer in painting, Rice started a full-length self-portrait for one of Australia's most prestigious portrait prizes, his first entry in five years.

"It's very much of a mood and a frame of mind," Rice says as he surveys a canvas in the bedroom that serves as his studio. "It just continues the game of playing with my own identity."

The gallery expects an increase in entries for the Archibald, Wynne and Sulman Prizes courtesy of the pandemic-led delays that extended the entry deadline and offered an unexpected period of introspection. In 2019, the number of entries in the Archibald Prize hit an all-time high of 919.

Rather than elect to take the Archibald Prize online, the Art Gallery has delayed the exhibition until September and given artists an additional three months to finalise works, with submissions opening on Monday and closing on August 14.

"The wonderfully exciting thing about the Archibald is that despite its venerable legacy, we never know what each year will bring. This year will be no different," Ryan said.

Measures are in place to ensure the gallery can process all artwork entries, including adequate storage. The gallery's loading dock will open for two weeks from Monday.

"He even encourages me to be strong and go for it and 'do your studies'. I thought it was only me but then I find everyone can connect to him. He's more than a security guard, he is my mentor," Wengembo says.

Wengembo has impressed Rice, who has been pleased with the way the NAS safely transitioned online. "He brought a considerable set of skills with him to Art School, but has the wisdom to leave them at the boom gate and to engage with what he doesn’t already know how to do," Rice says. "That’s courageous, but is precisely the right way to approach one's time at art school."

Rice says he never gets jaded by the Archibald. "It's fun to enter, fun to be hung, and fun to be involved but I just wasn't feeling it this year and I was waiting to paint at art school. Then when lockdown happened you start to think about these things, you start to think about paintings and then it hits you in the head, this idea of slowly and painfully watering a plant that grows tall enough to hang you. Once you get an image like that, there's no getting rid of it until you paint it."

What might prove a silver lining for Rice, could prove an unhappy temptation for entrants who were close to finished when the prize was postponed. Rice has fallen into the same trap at times.

"I like the notion that good works of art are never finished, but abandoned," he says. "They can most certainly be overworked, but even ‘finished’ can be taken too far. I wonder how many paintings were better in the state they were about the time of the original deadline but have now been compromised by painters who just couldn’t help themselves."

Related posts:
Another internet boost could be speeding across the UK very soon
“It’s Joy & Pain Every Day": Caregiving In The Time Of COVID
Popular News
8 New Movies to Watch in August 2021
01/08/2021
Stuart Broad builds up to second Virtual Test with Sri Lanka
26/03/2020
Bindi Irwin Made Last-Minute Changes to Her Wedding Due to Coronavirus Lockdown
26/03/2020
Widow on The Repair Shop leaves viewers sobbing
26/03/2020
Coronavirus lockdown: Global quarantine reveals weird fact about humanity
26/03/2020
Recent Posts
This website uses cookies to improve your user experience and to provide you with advertisements that are relevant to your interests. By continuing to browse the site you are agreeing to our use of cookies.Ok