Was the drug-fuelled ‘swinging 60s’ a lie? More than half of revellers claim to be high on psychedelics after taking fake pills, scientists find

More than half of revellers claim to be high on psychedelics after taking fake pills, scientists have found.

Researchers gave 33 volunteers a placebo while telling them that it was instead a drug similar to magic mushrooms.

They then monitored the participants in a fake dance party setting where secret actors were pretending to have taken psychedelics.

Almost two-thirds of participants reported feeling some kind of effect from the placebo — from feeling ‘heavy’ to seeing paintings move.

The findings may help in tackling of depression, for which real psychedelics drugs have been recently proposed as a treatment. 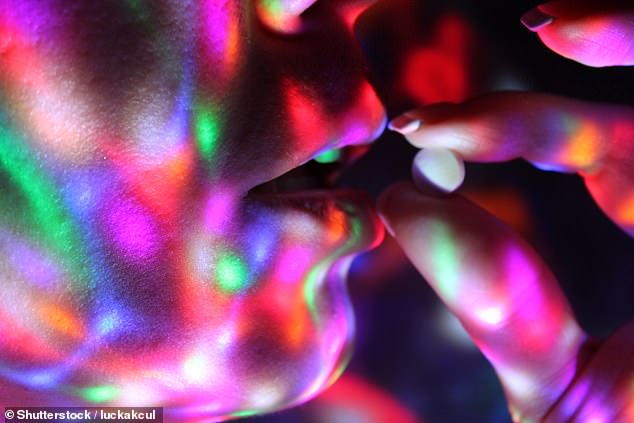 More than half of revellers claim to be high on psychedelics after taking fake pills, scientists have found. (stock image)

‘These results may help explain “contact highs” in which people experience the effects of a drug simply by being around others who have consumed it,’ said paper author and cognitive anthropologist Samuel Veissière of Canada’s McGill University.

In their study, Professor Veissière and colleagues recruited 33 participants, who had been told they were taking part in a study on the effect of drugs on creativity.

The participants were each given a placebo pill, but were told that the tablet contained a drug that resembled the active ingredient in magic mushrooms — one that would cause them to experience a change in consciousness.

They then spent four hours in a room that had been decked out like a psychedelic rave — complete with coloured lights, trippy paintings and a DJ.

Finally, among the participants were several actors who had been trained to act out the gradually increasing effects of the psychedelic drug that the volunteers had been told they had been given.

The researchers wanted to see if participants would experience placebo effects if they thought that everyone had consumed psychedelic drugs. 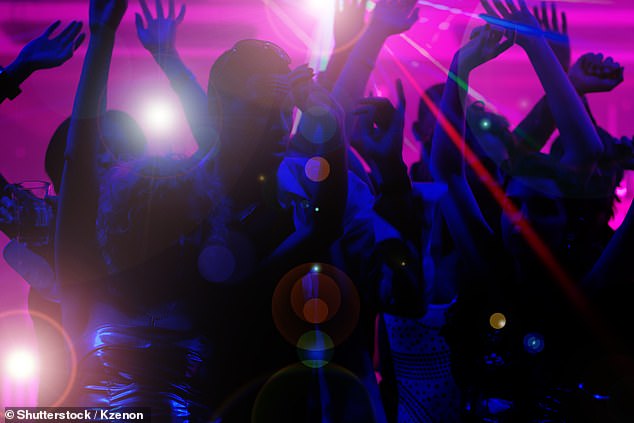 Researchers gave 33 volunteers a placebo while telling them that it was instead a drug similar to magic mushrooms. They then monitored the participants in a fake dance party setting where secret actors were pretending to have taken psychedelics

At the end of the study period, 61 per cent of the participants claimed that they had felt some effect from the placebo.

These ranged from mild symptoms to effects resembling the taking of a moderate-to-high dose of an actual drug — although such varied among individuals.

Some participants, for example, said that they saw the paintings on the walls ‘move’ or ‘reshape’ themselves.

Others described feeling “heavy… as if gravity [had] a stronger hold”, while another participant described experiencing a ‘come down’ before another ‘wave’ hit her.

‘Our study helps shed light on the “placebo boosting” component inherent in all medical and therapeutic intervention, and the social influences that modulate these enhancing effects,’ said Professor Veissière.

‘Placebo effects may have been under-estimated in psychedelic studies,’ he added.

‘The current trend towards “micro-dosing” (consuming tiny amounts of psychedelic drugs to improve creativity), for example, may have a strong placebo component due to widespread cultural expectations that frame the response.’

Professor David Nutt, at Imperial College London, is among the leading academics looking into whether a chemical contained in magic mushrooms could be used to help fight – or even cure – depression.

The psilocybin mushroom, commonly known as a magic mushroom, is a Class-A drug that has hallucinogenic effects when eaten.

The psilocybin produced by the mushroom can broken down into psilocin, a chemical which academics believe could be used to treat depression.

Professor Nutt led a study in which 20 people with ‘treatment resistant depression’ – depression that has not responded to at least two other forms of treatment – were given an extracted form of psilocin in a controlled environment.

Results of these trials show it has had a positive effect in a very small group, with some even being classed as being ‘cured’ of depression.

Professor Nutt explained this is because the psilocin allows the brain to break down established pathways and form new ones.

Speaking on BBC Wales documentary Charlotte Church: Inside My Brain said: ‘Under psilocybin the brain can make connections which the brain hasn’t been allowed to make since childhood.

‘We believe that by breaking down those old connections, and making new connections, is why people overcome their depression.

‘Depression is a way of thinking that gets very deeply embedded. People ruminate, they think the same negative thought all the time.

‘By disrupting those thought processes, we can allow people to escape from it.’

‘With the recent re-emergence of psychedelic therapy for disorders such as depression and anxiety, clinicians may be able to leverage these contextual factors to obtain similar therapeutic experiences from lower doses.’

This, he added, ‘would further improve the safety of the drugs.’

The full findings of the study were published in the journal Psychopharmacology.