Sounds like Prince Harry has discovered the power of talk therapy. If only more young men had the courage, will and funds to do the same. In his post-royalty freedom tour of America’s most popular podcasts, the Duke of Sussex has been getting publicly vulnerable about his mental health.

Following his exodus from Britain with his actor/activist wife Meghan Markle and their son Archie, the 36-year-old grandson of the Queen really seems to be enjoying being able to speak his mind. On actor Dax Shepard’s podcast Armchair Expert, Harry revealed that he is in therapy to address the not altogether pleasant experience of growing up royal. 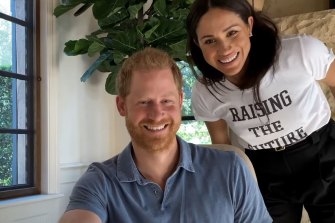 Prince Harry and Meghan Markle in the new mental health series, The Me You Can’t See. Credit:Apple TV

“It was a conversation I had with my now-wife,” he said, of the moment he decided to enlist a therapist for help. “She saw it straight away. She could tell that I was hurting and that some of the stuff that was out of my control was making me really angry and would make my blood boil.”

He spoke about feeling helpless on three occasions in his life: in the back of a car while his mother was chased to her death by paparazzi, in a helicopter while serving in Afghanistan, and most recently, watching the press hound his beloved wife the same ruthless way they did Diana.

The lingering trauma of those events prompted him to get professional help. It is always – prince or not – a courageous decision to do that. Especially, perhaps, for men, who’ve been conditioned to believe that stoicism is a worthy emblem of their masculinity.

It is grim but pervasive, this idea that talking about our problems is somehow a sign of weakness, when in fact, it is a tremendous gesture of strength. Just see the way British tabloids have reacted to Harry’s revelation that he’s in therapy for proof of how wickedly, perversely difficult it is for a young man to admit that he needed help.

“It is always – prince or not – a courageous decision to do that. Especially, perhaps, for men, who’ve been conditioned to believe that stoicism is a worthy emblem of their masculinity.”

The same newspapers who earlier this month published countless articles to mark Mental Health Awareness Week have now run headlines like “Self-obsessed Prince Harry is the embodiment of someone who has had too much therapy” about a man who is simply trying to deal with the lasting pain of losing his mother at age 12, going to war, and witnessing the callous, racist way his wife has been treated by the country of his birth. This sort of distress is impervious to privilege.

He may have grown up in a literal castle and has just signed a nine-figure deal with Netflix, but Harry has also known the sort of emotional pain that doesn’t discriminate by social status. He might be able to fly by private jet or pay for any material thing he could ever want, but I expect he’d relinquish all that if he could have his mother back, or raise his family in safety, or know peace. And so, brilliantly, Harry has decided to see a therapist – something we should all be able to do.

It should be as easy and as normal as seeing a GP. Harry asked his therapist to help him reframe his own narrative, take back control in his life, and recognise the trauma he’s inherited. Judging by the conversation he had with Dax Shepard, it sounds like he’s found someone good. He is self-aware, self-possessed, and committed not only to resolving his own trauma, but encouraging others to do the same. It’s admirable, and it could make a difference. So long as mental illness is derided, misunderstood and underfunded, it’s important for people like Prince Harry to normalise getting help.

His royal relatives have been quite vocal about mental health, and yet, it seems that none of them suggested this wounded young man seek therapy. Meghan Markle coaxed her husband into getting help and that, truthfully, is an act of great love. She, no doubt, is there for Harry, too, to listen and comfort and rally behind. But Meghan is not a therapist.

She’s not been trained to guide someone as he makes sense of the profound trauma in his past. So she did the best, and most pragmatic thing, by suggesting he pay for talk therapy to organise and diminish his worries. If only more of us had a partner who encouraged us to get therapy. If only all of us had access to good therapy. We may not all have a grandmother who is sovereign to 15 countries, but we all have pain. May we find our way through it, like Harry.

Kate Leaver is the author of The Friendship Cure and Good Dog.

Get a little more outta life

Start your week with practical tips and expert advice to help you make the most of your personal health, relationships, fitness and nutrition. Sign up to our Live Well newsletter sent every Monday.

Most Viewed in Lifestyle