General Mills CEO: Breakfast cereal still No. 1 in US

General Mills CEO on how the pandemic impacted company

Kellogg’s is going to get "creepy" and "kooky" with limited-edition "Addams Family" cereal and snack boxes.

Shoppers can expect to see depictions of the classic TV family in animated form on the boxes of these Kellogg’s products nationwide starting in July. The character who will be featured on the packages includes Lurch, Wednesday Addams, Cousin It and Uncle Fester.

The marketing campaign comes two months ahead of the release of "The Addams Family 2," an animated sequel produced and distributed by BRON Studios and MGM Studios. The highly anticipated film is scheduled for an Oct. 1 release in theaters. 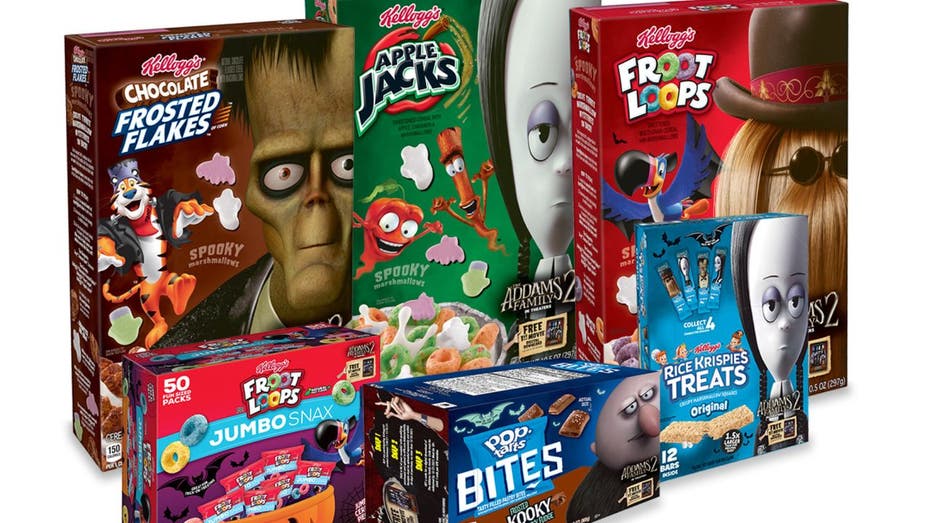 Kellogg’s announced it is releasing limited-edition cereal and snack boxes that feature characters from “The Addams Family 2,” an animated film sequel that’s set to release in October 2021. Shoppers can expect to see the faces of iconic characters li

Kellogg’s is also offering a free digital download of the two studios’ "Addams Family" movie from 2019 to anyone who purchases these limited-edition boxes. The complimentary downloads can be redeemed through KFR.com/AddamsFamily2 from July 30 to November 15.

"A timeless Halloween classic, 'The Addams Family' has brought families and friends together for years," Kellogg All Family Cereal senior marketing director Laura Newman said, in a statement. "This collaboration enables families to bring the oddly lovable Addams Family spirit home with our spooky cereals, trick-or-treat-ready snacks and a free download of the first animated Addams Family movie within specially marked boxes."

The previous animated movies reportedly made over $203 million worldwide, according to ticket sale data published by IMDbPro’s Box Office Mojo.

In a statement, MGM’s chief marketing officer Stephen Bruno called "The Addams Family" a "fan-favorite" that has resonated with audiences for decades.

"With this exciting new Kellogg collaboration, we are giving fans an entirely new way to experience everyone's favorite macabre clan beyond this October's movie release, whether it's enjoying a bowl of spooky cereal or nibbling on an out-of-the-ordinary trick-or-treat snack," Bruno said.

"The Addams Family" made its television debut in 1969.