John Fury vs Mike Tyson tale of the tape: How pair compare as world champ’s dad, 56, speaks on fight versus Iron Mike

JOHN FURY revealed he would 'like to have a go' at fighting heavyweight legend Mike Tyson.

Tyson returned to the ring for the first time since 2005 at the end of November as he boxed to a draw against Roy Jones Jr. 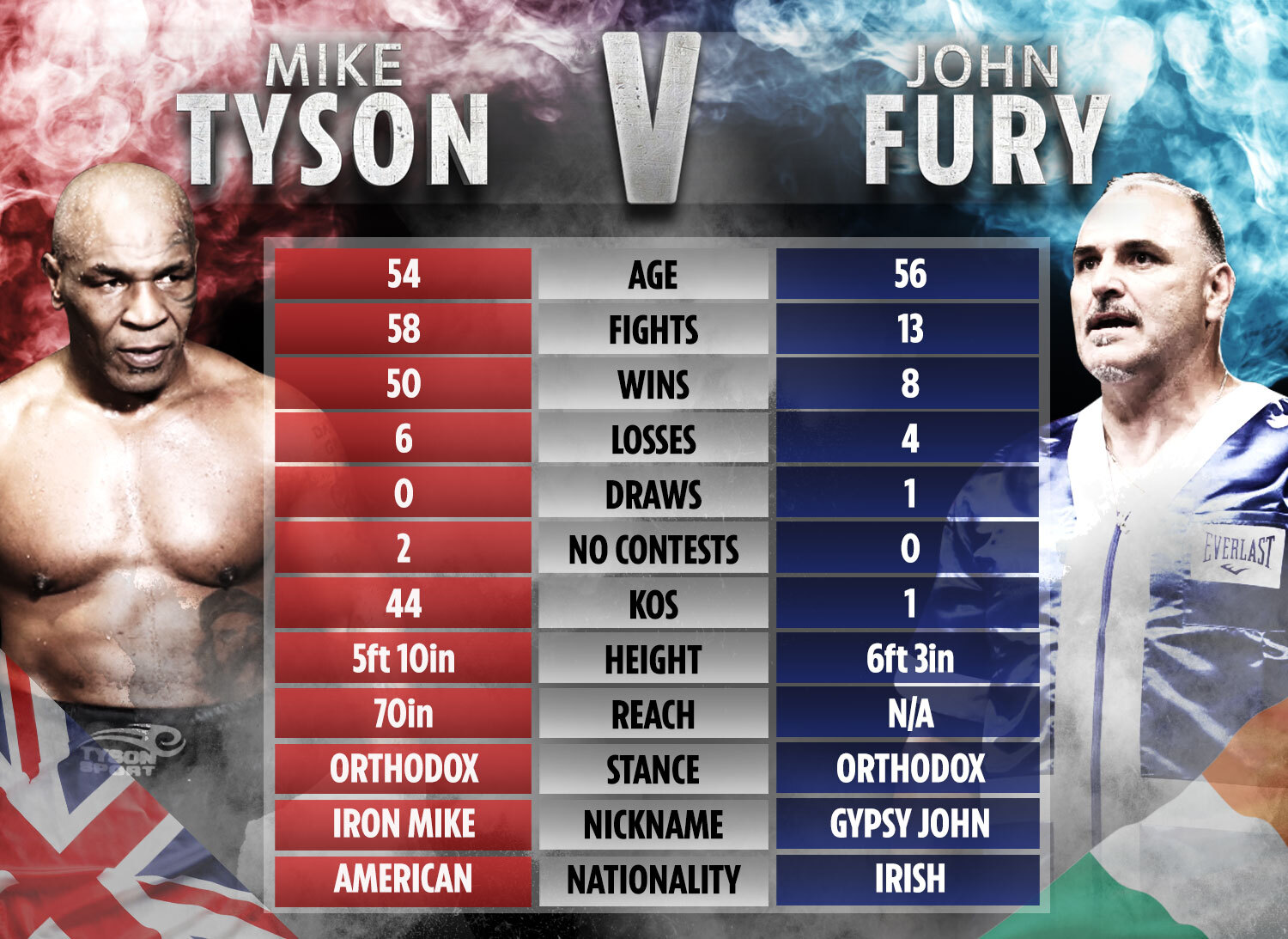 It caught the eye of Tyson Fury's dad John – who called to face Iron Mike.

He said earlier in the year: "Listen, I’d like to have a go. You know, at the end of the day, I named my son after him, it would be a good thing.

"But I know one thing, he’ll be in no better shape than me.

"I tell you what it is, I’ve got the edge in shape because I’ve lived better, I’ve lived cleaner."

Here SunSport takes a look at how the pair match up despite the call out being nothing more than a fantasy fight.

Tyson's career as a prizefighter looked over when he retired after two dismal defeats.

But this year he made the stunning announcement that he wanted to make a comeback to raise money in exhibition bouts.

He started off by going eight rounds with Jones – 17 years after they first held talks to fight – in what proved a box office hit, with over 1million pay-per-view buys.

He kept a good pace and landed some nice body shots, but either refrained or failed to land any of his signature finishing hooks and uppercuts.

Afterwards, Tyson revealed he wanted to make fighting for fun a regular thing. 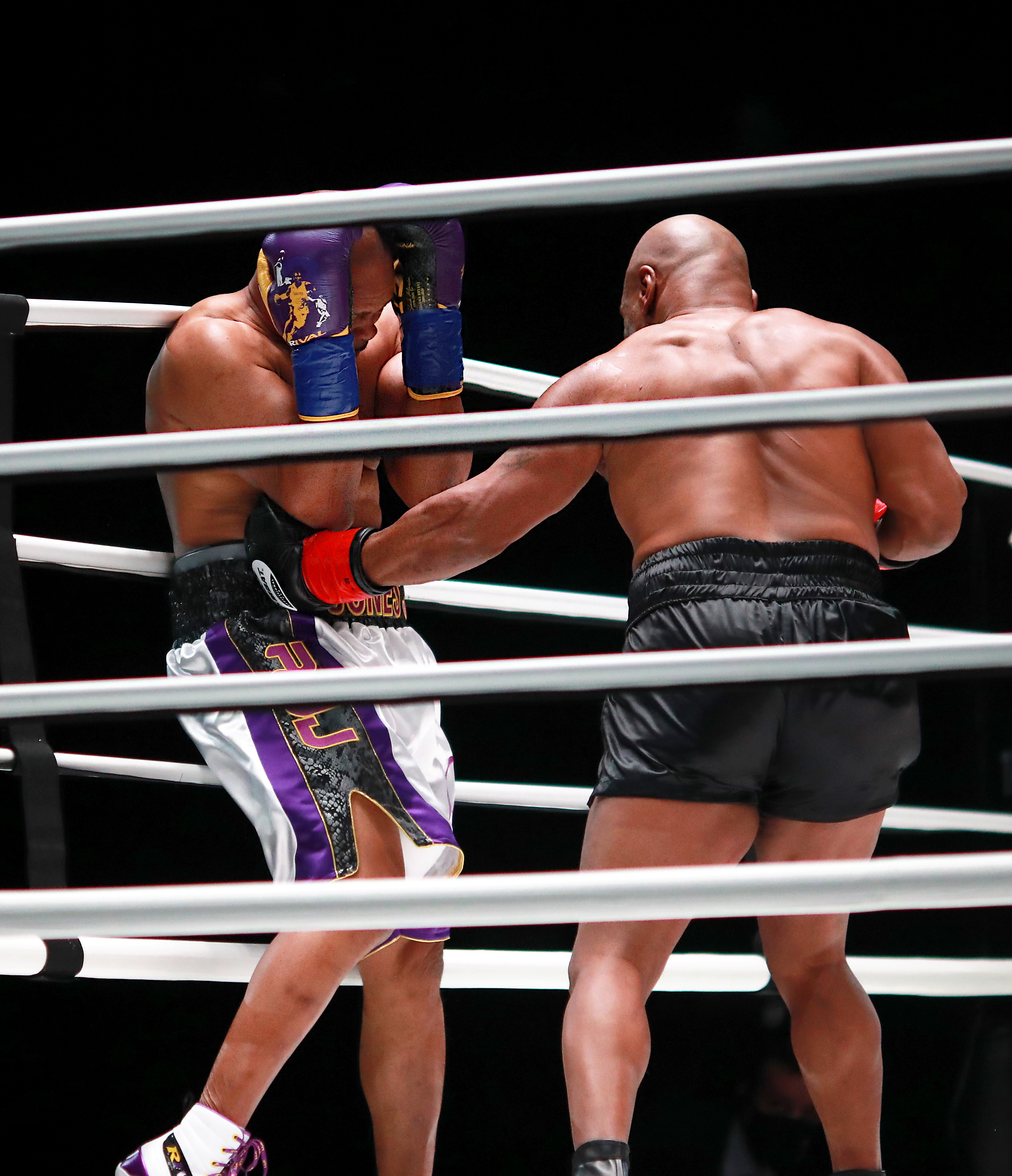 Fury comes from a long lineage of bare-knuckle fighters, owing to his Irish traveller roots.

But his pro career spanned over eight years, beginning in April 1987 and ending in June 1995.

But even during his time in the pro ranks, he still fought bare-knuckle and claims to have won £100,000 after one of his wins.

After his fighting career ended, he focussed on becoming a trainer and has cornered both Tyson and his other son Tommy.

John regularly trains with them both and keeps up the pace on long jogs.

With limited footage on Fury's career as a fighter it is hard to make any judgement on his skill.

He claims to be in better shape than Iron Mike, but again the evidence is lacking, despite a few clips son Tyson uploaded which revealed John can pack a punch on the heavy bag.

For 54-year-old Tyson, his effort against Jones went some way to prove that he still has plenty of fight left in him.

His trademark head movement and quick footwork was on display, albeit it not so ferociously.

Tyson looked to be making his greatest mark fighting on the inside, instead of throwing hayemakers at range.

Anyone, including Fury, lined up to face the veteran puncher can expect the action to be fought on the inside.

And his right hand – formerly his greatest threat – appeared not so dangerous 15 years on.

But the exhibition rules Tyson signed up for prohibited KOs – meaning he could be one overcooked punch away from closing out the show.