How the Queen was part of pop culture around the world

The Queen on screen! How Her Majesty was brought to life in films and TV series from The Crown to The Simpsons – and influenced pop culture all over the world

The Queen may have been a notoriously private person  – but Her Majesty’s life was often depicted in some of the world’s most famous TV series and films.

The monarch, who passed away aged 96 last week at Balmoral, influenced pop culture all over the world, and was paid homage to by Hollywood and even America’s most beloved cartoon family The Simpsons.

The Queen was also depicted in the popular Netflix drama series The Crown; actors Claire Foy, Olivia Colman and Imelda Staunton have all portrayed the monarch during different stages of her life for the TV show.

Meanwhile Hollywood royalty Helen Mirren depicted the monarch in the 2006 film The Queen, for which she won an Academy Award and a BAFTA.

Elsewhere, depictions were more light-hearted – from an appearance in The Minions movie to a regular slot on the British comedy show Spitting Image.

Having reigned for 70 years, the Queen’s standing as a cultural icon can’t be understated.

Here FEMAIL takes a look at the films, TV series and cartoons that the Queen has appeared in as a beloved character… 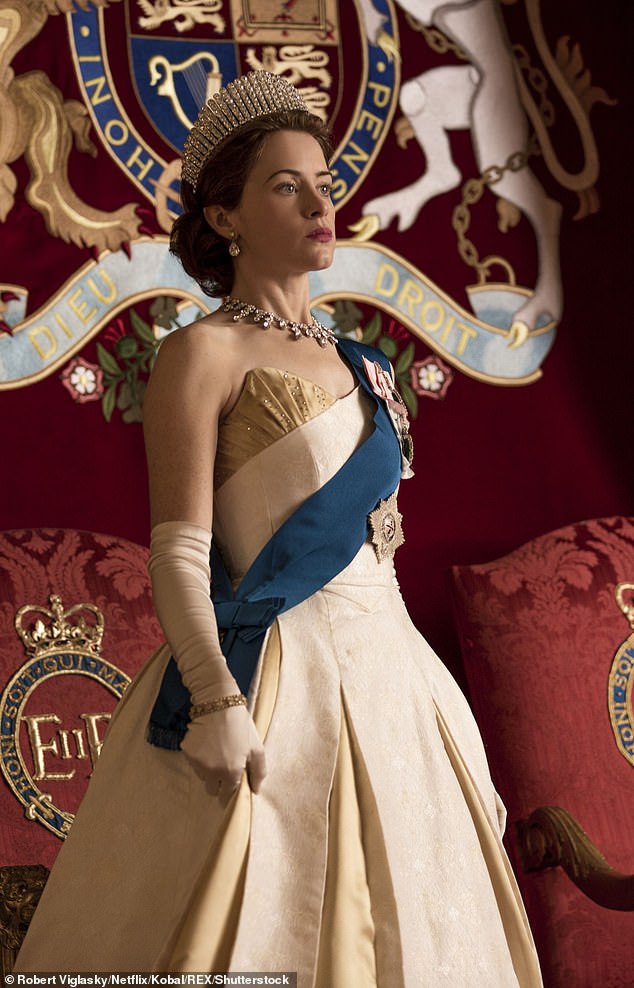 Claire Foy portrayed the Queen during her early years as monarch in the first two seasons of The Crown, chronicling her life from her wedding in 1947 to Philip, Duke of Edinburgh until 1964 (pictured during season 2 of the show) 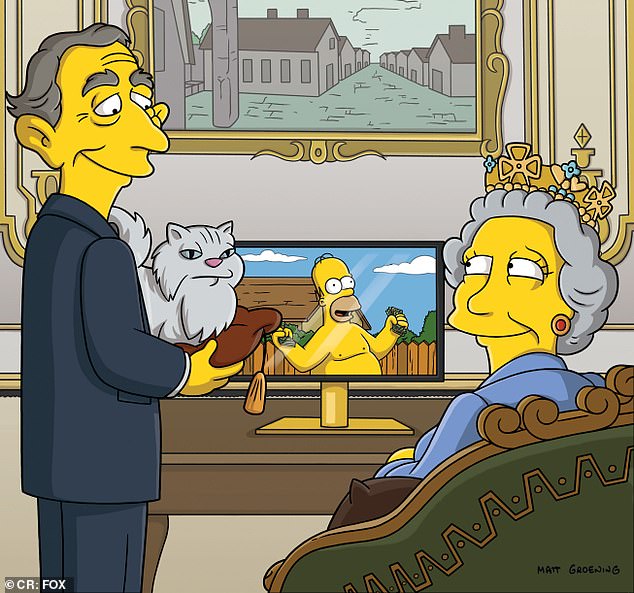 Meanwhile the iconic TV show The Simpsons has also featured the Queen in six episodes, while she has also had mentions in a further four. The royal was voiced by Tress MacNeille and Maggie Roswell in the popular cartoon. In one of the plot lines, the Queen was meant to give Krusty the Crown a knighthood, before it instead went to Elton John 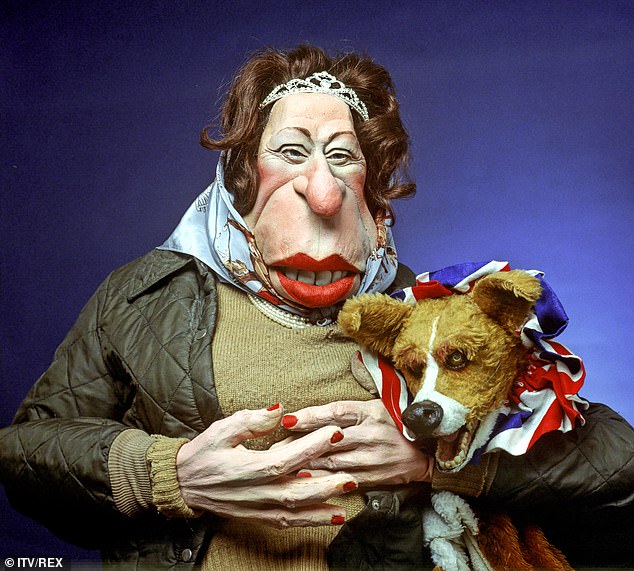 Spitting Image is a British satirical television puppet show, created by Peter Fluck, Roger Law and Martin Lambie-Nairn. First broadcast in 1984, the series ran for over 18 series and aired on ITV. The show revived in 2020 and Debra Stephenson voiced the Queen 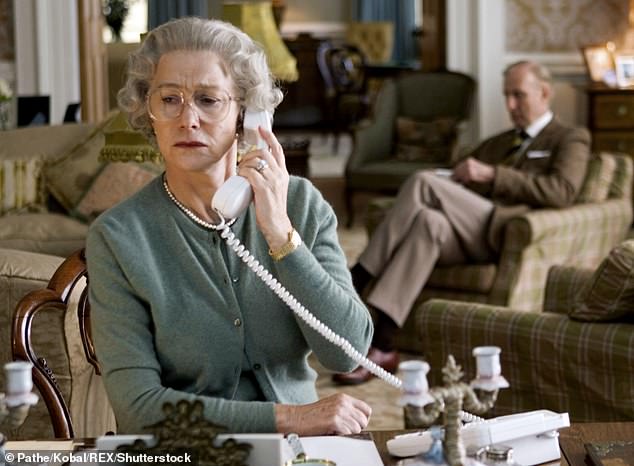 Elsewhere, Hollywood actor Helen Mirren played the monarch in the 2006 film The Queen. She won an Academy Award for her portrayal of Her Majesty in Stephen Frears’ film, which was also nominated for Best Picture. The movie depicts the events following the death of Diana, Princess of Wales in 1997 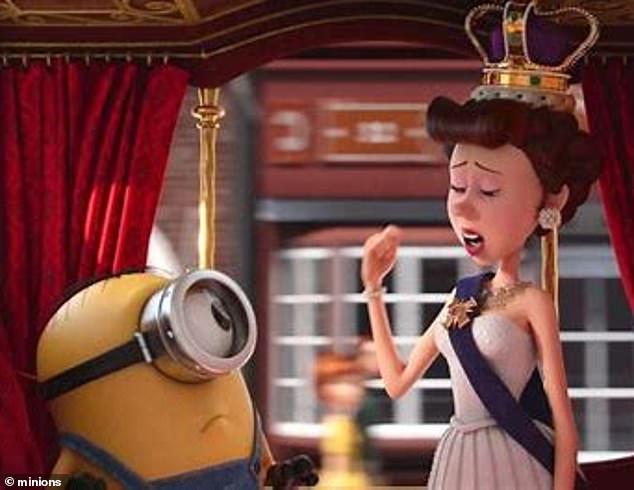 Many cartoons paid homage to the famous royal throughout her life, and she even appeared in The Minions movie. Characters Kevin, Stuart and Bob tried to steal her crown in the box office smash. The royal was voiced by Ab Fab star Jennifer Saunders, who gave a regal voice performance as the monarch 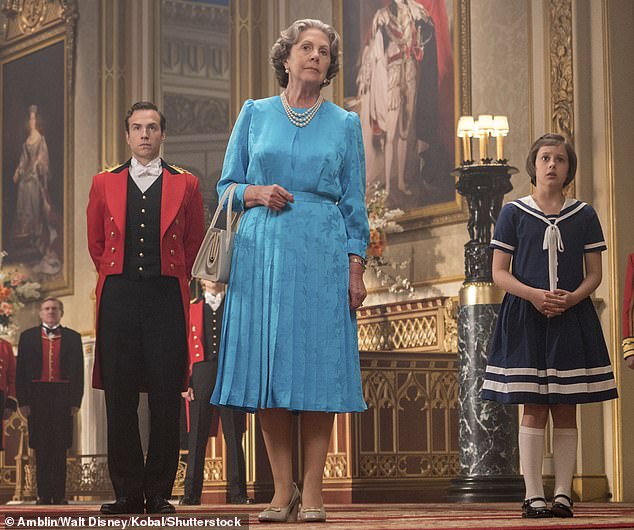 Penelope Wilton played the Queen in the 2016 remake of the Disney’s live action film The BFG which was directed by Steven Spielberg. Although the film is fantasy, Wilton felt it necessary to approach the role seriously, saying she had to ‘play the actual Queen’ 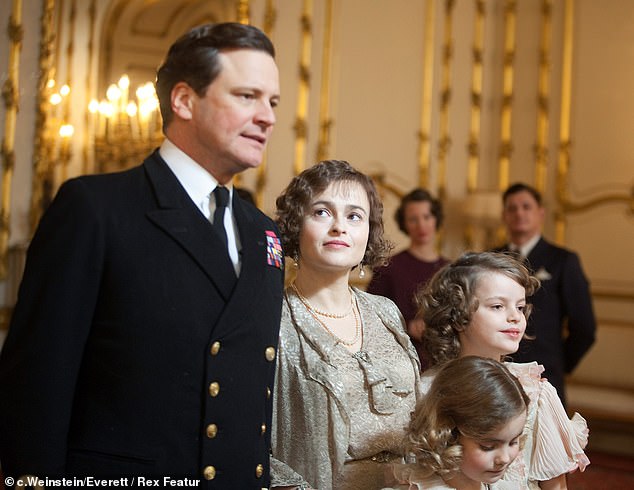 Colin Firth playing King George in the hit film The King’s Speech, which included a young Princess Elizabeth played by Freya Wilson in the 2010 film. The film depicts the story of the King trying to overcome his stammering problem with the help of speech therapist Lionel Logue. (L-R) Colin Firth, as King George VI, Helena Bonham Carter, as Queen Elizabeth, Ramona Marquez as Princess Margaret, Freya Wilson as Princess Elizabeth 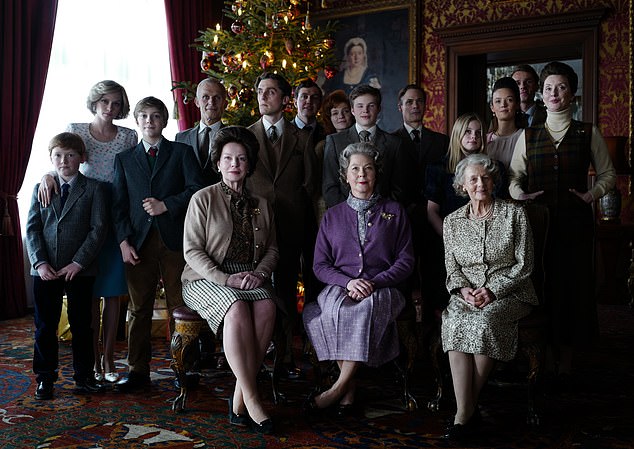 In the 2021 film Spencer, the Queen is portrayed by Stella Gonet (front centre) with Princess Diana being played by Twilight star Kristen Stewart (back left). The film follows the story of Diana as she struggled with mental-health problems during her Christmas holidays with the Royal Family at their Sandringham estate and she decides to end her decade-long marriage to Prince Charles 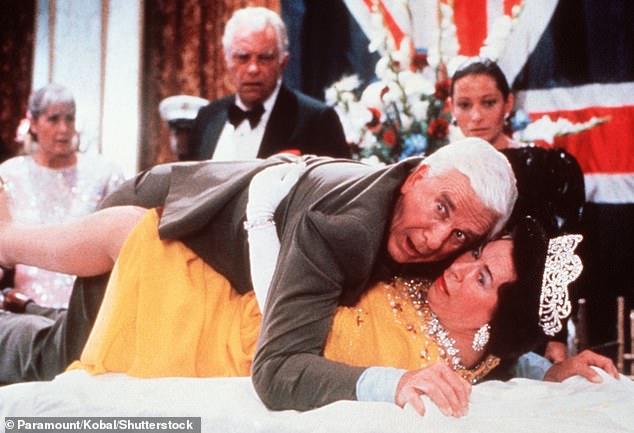 In the hilarious 1988 hit comedy Naked Gun, actor Leslie Nielsen is tasked with protecting Queen during a trip to Los Angeles.  The plot follows Frank Drebin, an inept police detective, and Jane Spencer as they set out to impede a plan to brainwash people into assassinating the monarch 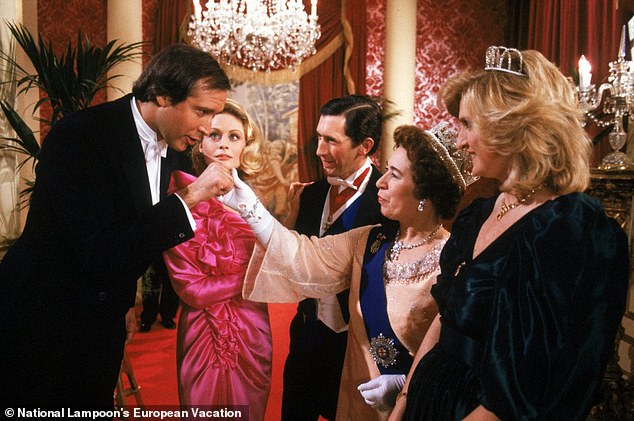 Jeannette Charles has played The Queen twice in her career. The first time came in 1985, when she starred in National Lampoon’s European Vacation, which tells the story of the Griswold family when they win an all-expense-paid trip to Europe as chaos of all sorts occurs 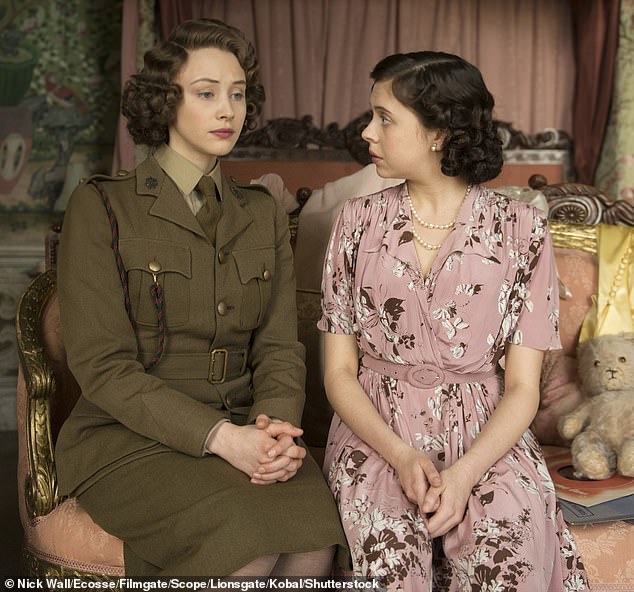 Sarah Gadon played Her Majesty in the 2015 film A Royal Night Out. The film chronicles a fictional even on VE day, when Princesses Elizabeth and her sister Margaret, played by Bel Powley (right)  join the celebrations, against the Queen’s wishes 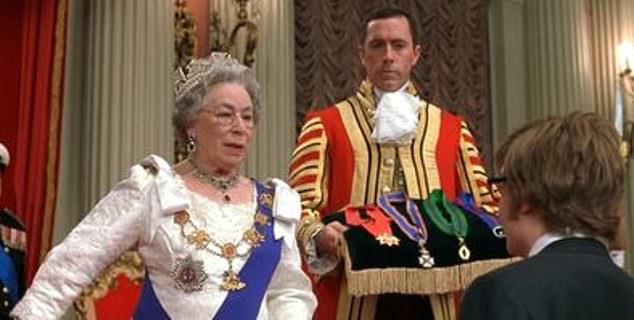 Jeannette Charles went on to play the monarch for a second time in Austin Powers In Goldmember alongside Mike Myers. Released in 2002, the film was a popular spy comedy which was a loose parody of the James Bond films 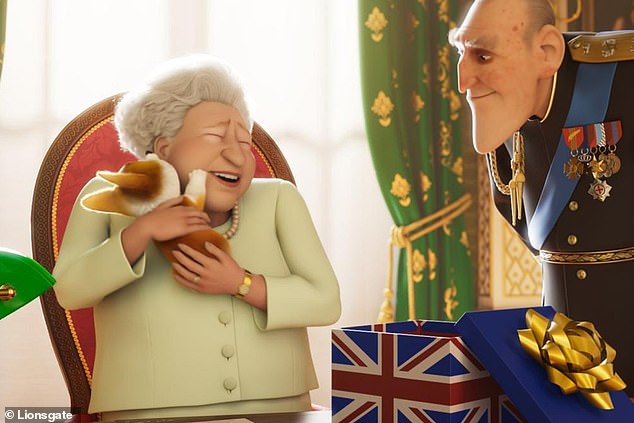 In 2019 the Queen was portrayed in another CGI cartoon, this time voiced by Mari Devon and Julie Walters. The adorable flick is about Her Majesty’s lost corgi, Rex, voiced by Jack Whitehall, who gets caught up in an adventure in London after getting lost outside the palace 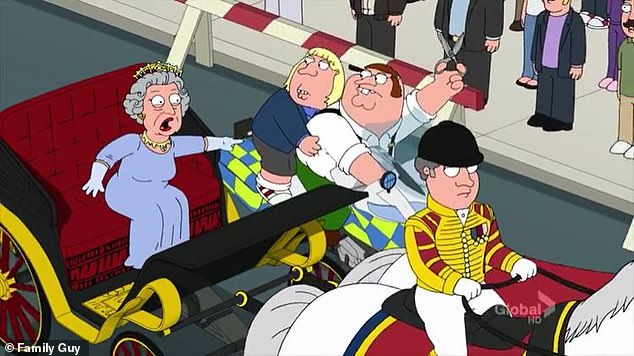 The Simpson’s isn’t the only cartoon series to feature the Queen. In 2012, Cate Blanchett voiced the monarch in an episode of Family Guy 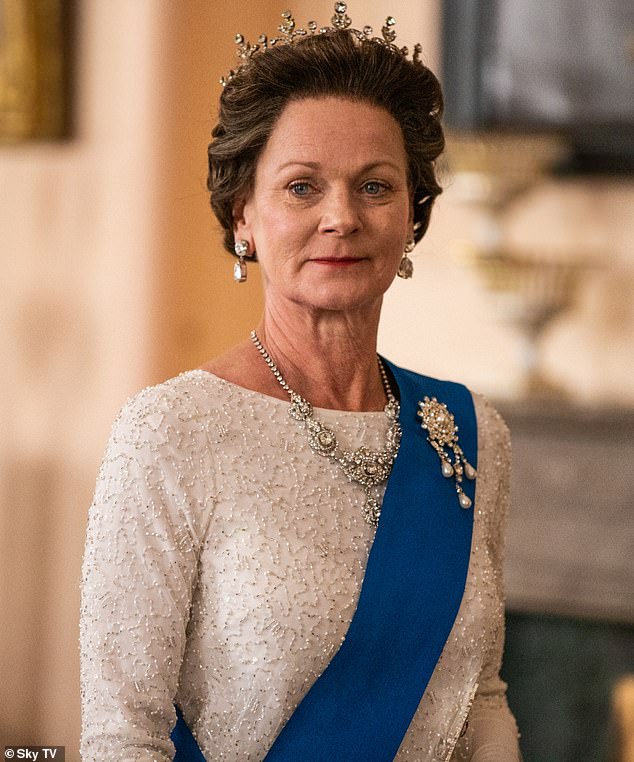 Samantha Bond played the monarch in the one off Sky One drama series The Queen and I in 2018. The show imagines a brand new government coming into office and a power-hungry prime minister banning the Royal Family, forcing them to live on a council estate in the Midlands