Is this the key to preventing vision issues in space? High-tech SLEEPING BAG is developed that pulls down body fluids that naturally flow into astronauts’ heads while they sleep

A novel sleeping bag could be key to stopping astronauts developing optical health complications in space, including swelling of the optical nerve and vision loss.

The sack, built at the University of Texas Southwestern Medical Center, works by using vacuum tech to pull down body fluids that would otherwise pool in the head.

A similar increase in brain pressure occurs when you lie down at night, although on Earth, getting up in the morning fixes this by allowing gravity to pull the fluids down.

In space, this is not possible, and so the fluids cause the optic nerve to swell and the eyeball to flatten, which is why many returning astronauts have vision issues.

The team tested the sleeping bag on a brave participant in Texas, who spent three days lying on his back in bed.

While this is usually enough time to cause vision issues, wearing the special, suction-based sleeping bag at night for eight hours was enough to stop this change from occurring.

The technology, the team said, could prove critical for a future crewed missions to Mars, in which astronauts would need to spend long periods of time in low gravity. 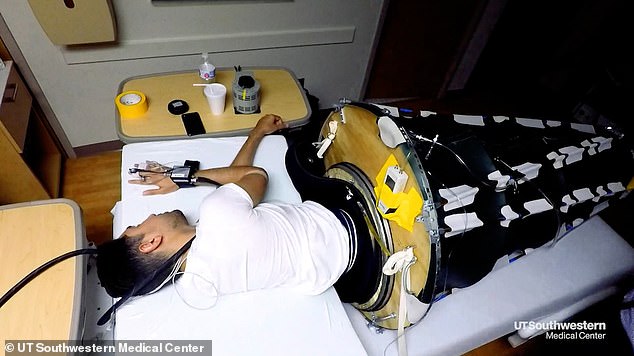 A novel sleeping bag could be key to stopping astronauts developing optical health complications in space, including swelling of the optical nerve and vision loss. Pictured: internal medicine hospitalist James Leidner lies in the sack, which works by using vacuum technology to pull down bodily fluid that would otherwise pool in the head 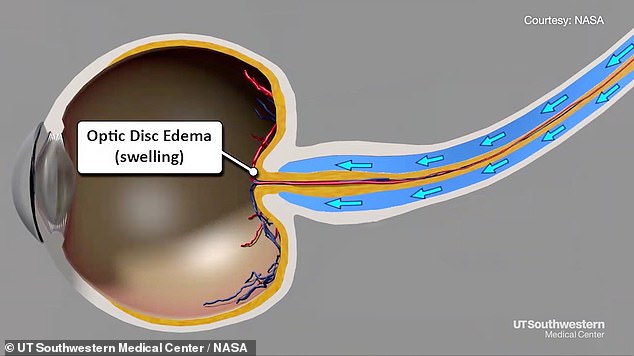 Spaceflight associated neuro-ocular syndrome — SANS, for short — has been linked with a number of structural changes in the body, including a progressive flattening of the eyeball, swelling of the optic nerve (as depicted above) and retinal haemorrhage

SANS MAY CAUSE OTHER PROBLEMS

Alongside affecting the eye, Professor Levine and his team have also shown that spending time in a microgravity environment might also come with cardiovascular issues as well.

A 2018 study, for example, found that spending six months in microgravity may increase the odds of so-called ‘atrial fibrillation’ — form of arrhythmia that can lead to blood clots, heart attacks and also stroke.

‘It’s certainly possible there are other effects of brain pressure we haven’t documented yet,’ Professor Levine cautioned — noting that some could be long-term in nature.

‘Astronauts report something they call the “space stupids” — they make more mistakes than they think they should.’

‘Whether that has anything to do with the inability to lower the pressure, we don’t know.’

Regardless, the sleeping bag could also address the other, non-vision-related effects of SANS.

After returning from the microgravity environment of the International Space Station, more than half of NASA astronauts who served for more than six months have reported changes to their vision.

Such shifts often include the development of farsightedness and mild headaches, but in more severe cases can manifest as losses in both near and distant acuity.

This condition, dubbed SANS (spaceflight associated neuro-ocular syndrome), is linked to a number of structural changes in the body, including a progressive flattening of the eyeball, swelling of the optic nerve and retinal haemorrhage.

‘We don’t know how bad the effects might be on a longer flight, like a two-year Mars operation,’ said paper author and cardiologist Benjamin Levine of the University of Texas Southwestern Medical Center, who is working with NASA on the SANS issue.

‘It would be a disaster if astronauts had such severe impairments that they couldn’t see what they’re doing and it compromised the mission.’

Previous research from the University of Texas has indicated that SANS is most likely caused by the pressure that bodily fluids apply to the brain when in microgravity.

This is not an issue down here on the Earth — as long as you’re standing (or even seated) upright, gravity acts to pull fluids down into the body.

But in space, this unloading process doesn’t happen, allowing more than half-a-gallon of bodily fluids to pool in the head, where it applies excessive pressure to the eyeball that can lead to damage in the long-term.

‘You can’t stand up in space to unload the pressure. That’s the problem,’ said biomedical engineering and SANS researcher Michael Stenger of NASA.

To explore this issue further, the researchers recruited cancer survivors who, as a result of having received chemotherapy, retained ports on their heads that allowed the team the rare opportunity to directly measure the pressure in their brains.

Each participant volunteered to go on a so-called ‘vomit comet’ — a parabolic flight into the upper atmosphere that temporarily simulates weightlessness and allowed their brain pressure to be measured as their body fluids floated upwards.

‘It was hard,’ commented Philadelphia’s Wendy Hancock, a leukaemia survivor who agreed to go on more than three dozen of the special, up-and-down flights.

‘But NASA is awesome, so, heck yeah, I was going to jump at the chance to help! I did it for the astronauts.’

Analysis of the data recorded revealed that the the brain pressure experienced by someone lying down in space is actually lower than on the Earth.

However, there is no natural way to release this pressure in space. 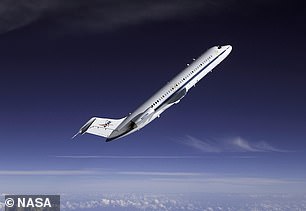 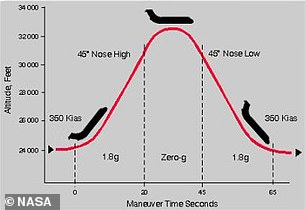 The researchers recruited cancer survivors who, as a result of having received chemotherapy, retained ports on their heads that allowed the team the rare opportunity to directly measure the pressure in their brains. Each participant volunteered to go on a so-called ‘vomit comet’ (left)— a parabolic upper atmosphere flight (right) that temporarily simulates weightlessness and allowed their brain pressure to be measured as their body fluids floated upwards

Building on these findings, Professor Levine and colleagues teamed up with outdoor retail firm Recreational Equipment, Inc. (REI) to develop a special sleeping bag that uses a vacuum around the lower body to relieve pressure on the brain.

Similar concepts have been used for decades to help astronauts maintain muscle and bone mass in space, but these had never been explored as an antidote for SANS.

Unlike the kind of sleeping bag you might take on a camping trip, the high-tech sack has a solid frame that loosely resembles an ice cream cone and is designed only to fit over a person from the waist down.

One of the 10 test subjects for the sack was James Leidner, an internal medicine hospitalist who is interested in a career in aerospace health, who undertook two three-day stints lying in bed in a research room, allowing his brain pressure to rise.

During the second visit, he was placed in the special sleeping bag for eight hours each night, letting the team show that the sack was effective in helping to lower the brain pressure that resulted from lying down (or from being in space.)

‘Being productive has gone out the window,’ Dr Leidner joked — noting how difficult it was for him to type on his laptop while lying flat on his back in the sack.

‘But it’s an experience I could tell my kid one day, if it helps humans land on Mars.’ 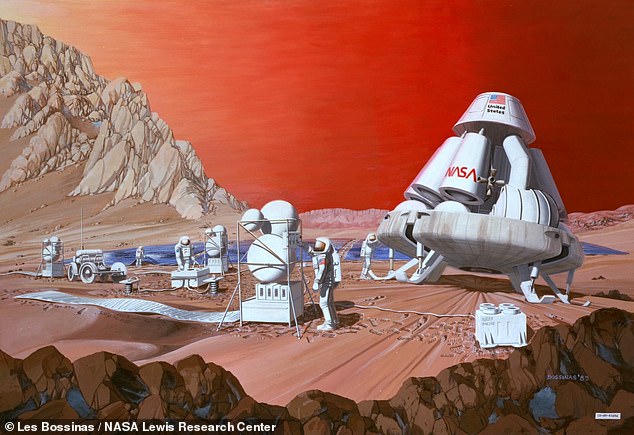 Although the team hope that SANS will have been vanquished by the time NASA is ready to launch a mission to Mars in the 2030s (as depicted), several questions remain to be answered before the agency can test the sack on the International Space Station. For example, it remains unclear how much time astronauts would need to spend in the special sleeping bag each day

Although the team hopes that SANS will have been vanquished by the time NASA is ready to launch a mission to Mars in the 2030s, several questions remain to be answered before the agency can test the sack on the International Space Station.

For example, it remains unclear how much time astronauts would need to spend in the special sleeping bag each day for it to prove effective.

‘This is perhaps one of the most mission-critical medical issues that has been discovered in the last decade for the space program,’ noted Professor Levine.

‘I’m thankful for the volunteers who are helping us understand, and hopefully, fix the problem.’

The full findings of the study were published in the journal JAMA Ophthalmology.

Mars has become the next giant leap for mankind’s exploration of space.

But before humans get to the red planet, astronauts will take a series of small steps by returning to the moon for a year-long mission.

Details of a the mission in lunar orbit have been unveiled as part of a timeline of events leading to missions to Mars in the 2030s.

Nasa has outlined its four stage plan (pictured) which it hopes will one day allow humans to visit Mars at he Humans to Mars Summit held in Washington DC yesterday. This will entail multiple missions to the moon over coming decades

In May 2017, Greg Williams, deputy associate administrator for policy and plans at Nasa, outlined the space agency’s four stage plan that it hopes will one day allow humans to visit Mars, as well as its expected time-frame.

Phase one and two will involve multiple trips to lunar space, to allow for construction of a habitat which will provide a staging area for the journey.

The last piece of delivered hardware would be the actual Deep Space Transport vehicle that would later be used to carry a crew to Mars.

And a year-long simulation of life on Mars will be conducted in 2027.

Phase three and and four will begin after 2030 and will involve sustained crew expeditions to the Martian system and surface of Mars.