If Gavin Williamson’s handling of A-levels, getting children back to school and establishing authority over teaching unions were assessed by an examiner, he would get three Fs for ‘fail’, writes SIMON WALTERS

The problems wrought by coronavirus would have challenged some of the finest statesmen in history. So it’s not surprising that Gavin Williamson is having difficulty.

If the Education Secretary’s handling of A-levels, getting children back to school and establishing authority over Left-wing teaching unions were assessed by an examiner, he would get three Fs for ‘fail’.

You might think that when he was given this critical Cabinet job last year, it was because he had a passion for education.

Nothing of the sort.

If the 44-year-old is dedicated to improving school standards, he has hidden it well since becoming an MP ten years ago.

His maiden Commons speech focused on the need to recreate the glories of Britain’s Victorian manufacturing heyday. It was an understandable sentiment from the ex-boss of a small fireplace manufacturer, even if Mr Williamson is more Mr Pooter than Isambard Kingdom Brunel.

No, it was his passion for the political dark arts that got him a plum seat at the Cabinet table. 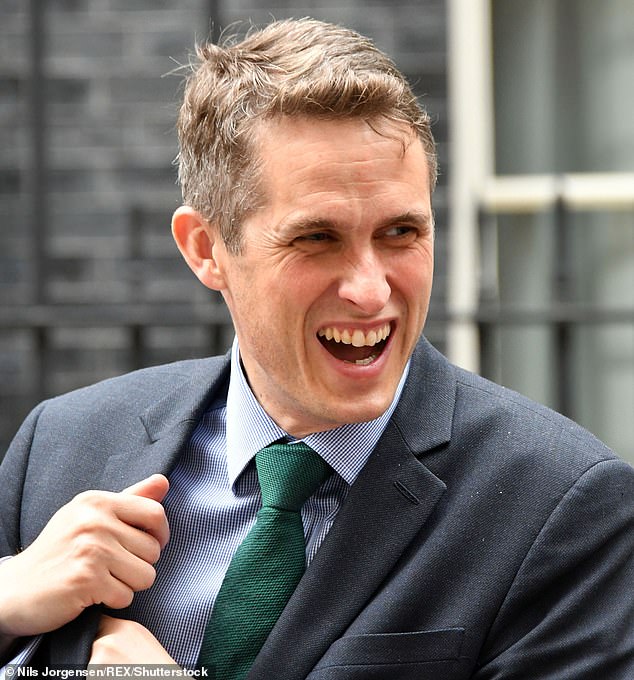 Poor marks: Gavin Williamson, the UK’s Minister of Education. If the Education Secretary’s handling of A-levels, getting children back to school and establishing authority over Left-wing teaching unions were assessed by an examiner, he would get three Fs for ‘fail’

As chief whip under Theresa May, he kept a pet tarantula, Cronus, in his office in an attempt to spin himself a reputation for menace and calculation.

The wily Yorkshireman later persuaded Mrs May to make him Defence Secretary, only to make a laughing stock of himself by saying Russia should ‘go away and shut up’ after Moscow denied responsibility for the attempted murder of ex-KGB spy Sergei Skripal in Salisbury in 2018.

A year later, Mr Williamson was sacked after being accused of leaking secrets from the National Security Council over Chinese telecoms giant Huawei’s role in building Britain’s 5G network. It was among the gravest charges levelled against any Cabinet Minister for decades. Some civil servants wanted Williamson jailed.

Yet three months later, Boris Johnson brought him back into the fold, appointing him Education Secretary.

This was a naked reward for the way Mr Williamson had used his Machiavellian political skills (including reportedly threatening to ‘reveal MPs’ secrets’) to cajole the parliamentary party into voting Boris into No 10.

Mr Williamson has admitted backing whichever leader will help him climb the greasy pole, switching loyalties from David Cameron to Mrs May and then Johnson.

Yet he had another appealing characteristic. Having rescued the younger man from political oblivion, Boris knew he would be compliant. It is the same story all round the Cabinet table.

Boris was elected Prime Minister by Tory MPs and went to the electorate promising to ‘get Brexit done’. A Cabinet full of Remainers would have prevented the will of the people being carried out.

As such, it was hardly surprising that he promoted Brexiteers like Foreign Secretary Dominic Raab and Home Secretary Priti Patel. But to make room for them and cronies like Williamson, strong performers including Jeremy Hunt, Liam Fox, Andrea Leadsom, Esther McVey and Geoffrey Cox (several of them Brexiteers) have all been shown the door.

No one, however, foresaw the coronavirus crisis that would kill tens of thousands, destabilise the economy for a generation and turn Brexit into a sideshow.

A Brexiteer former minister says Boris’s approach ‘worked when he was London mayor and brought in competent ‘back-room boys’ to handle the detail while he took the credit front of house.

‘But problems in London come over the horizon slowly and are fairly straightforward. When you are PM they come at the speed of light… you need the diverse talent of a strong Cabinet. Boris has got rid of that and we’re seeing the consequences.’

Despite being holders of great offices of state, neither Home Secretary Priti Patel nor Foreign Secretary Dominic Raab has the clout to challenge Mr Johnson – or his chief of staff Dominic Cummings.

Earlier this week, some Tory MPs said Mr Johnson had to show the same resolve to overcome Left-wing teaching unions that Mrs Thatcher displayed when she triumphed in the 1980s miners’ strike.

Mr Johnson said yesterday he still had confidence in Mr Williamson. For now, maybe. Cabinet sources say his name is top of the list of those lined up for dismissal in the next reshuffle.

And unlike the Education Secretary’s hastily concocted plans to sort out the A-level fiasco, there will be no chance to appeal.