From the Archives, 1975: ‘C-Day’ arrives as Australian TV goes colour

Colouring in the days of our lives 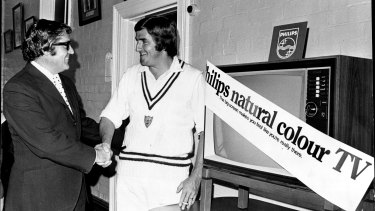 Things are changing. For one thing, you’ll never see Seven Brides For Seven Brothers in black and white again.

Nor any of those other never-ending Hollywood ghastlies that have been plaguing our television screens for years now. From now on, you’ll sit through them in their original colour (and that could be interesting too) – unless, of course, they were made in black and white!

Like automatic dishwashers, gas barbecues, rotary clotheslines and teabags, color television has arrived. And our lives will consequently be immeasurably improved, of course. Colour television starts in Australia, officially, on Saturday ‘C-day’.

And not a moment too soon. Already we’re behind Britain, USA, Sweden, France, West Germany, Italy, Hong Kong, Taiwan and even Malta…. all these countries (and others) have had it for some time. Even New Zealand beat us.

Most people who have seen colour like it. It is perhaps at its best with the deep greens and vivid blues of outdoor sports events; perhaps at its worst with the questionable colour techniques (these days) of old movies. Overall, few would dispute that it’s better all round. 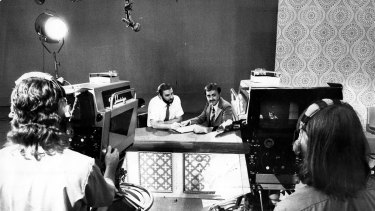 Australian TV stations gear up for the introduction of colour transmission in 1975.

Even so, the price is daunting. At present, the cheapest 14-inch sets cost about $550 and the best 26-inch more than $1000. Australian-made (even though most of the parts are imported) sets are also available in 22-inch and 20-inch, and you can buy smaller imported sets with 19-inch and even a few with 14-inch screens. There’s a wide variety, and you’d better choose carefully, because your colour television set will have more than a small amount of snob appeal.

It seems that in recent weeks there has been a slight scramble for sets. One branch of Waltons, for example, has been selling 60 a week for the past two weeks. Before that, sales averaged about 30 a week, but there was more demand than supply.

Most retailers have increased sales in the past two weeks.

Despite that, it is likely that of all home-owned television sets in Australia, only one in 15 will be a colour set for the first year or so. The figure might even be as low as one in 20.

Between 120,000 and 150,000 have so far been sold in Australia. That figure is expected to be about 600,000 by the end of the year. At the moment there is a bit of a rush by potential hirers of colour TV, because some firms are offering more attractive deals. The retailers say many people are going to wait for a while, expecting prices to go down (they could be disappointed).

There’s no doubt, whichever way the figures are fluctuating against original expectations, that we have another multi-million dollar industry. The annual demand for colour sets is expected to be about 500,000. That represents about $350 million a year that Australians will spend on television, not counting servicing.

And will local repair men be able to do the job? Already there have been complaints. One woman has had her set at a reputable repair firm’s factory for five weeks, and they still can’t find what’s wrong.

But generally the big retailers say they are ready for repairs. They are training young men, and they say they can already handle breakdowns.

And second, more than 75 per cent of all the parts of colour sets will be imported, which could add to the confusion.

One repairs manager said that the expected failure rate in colour sets within the warranty is 10-15 per cent. That is considerably more, he says, than with new black and white sets.

The big demand is for the 26-inch screen, probably because people think that if they are spending a large amount, they might as well spend a bit more for the very best.

And, at the moment, everyone claims to be able to meet the demand.

Mr George Soanes, managing director of the Box Hill-based A&R Soanar group, one of the biggest importers of colour television sets, says most retailers are coping with demand.

“But I would expect that after this weekend, the demand will really zoom, and then supply will not be sufficient,” he said.

Incidentally, Seven Bridges For Seven Brothers is on next week. And so are The King and I and Brigadoon. Our first week is rich in old colour.

Related posts:
Ginny & Georgia's Brianne Howey Talks Georgia's Many Men (Is Joe The One?) and the Unraveling of Her Secrets
‘The Bachelor: After The Final Rose’: Emmanuel Acho To Fill In For Chris Harrison As Host
Popular News
Carol Smillie looks unrecognisable in glam model snaps taken 33 years ago
29/01/2022
Stuart Broad builds up to second Virtual Test with Sri Lanka
26/03/2020
Bindi Irwin Made Last-Minute Changes to Her Wedding Due to Coronavirus Lockdown
26/03/2020
Widow on The Repair Shop leaves viewers sobbing
26/03/2020
Coronavirus lockdown: Global quarantine reveals weird fact about humanity
26/03/2020
Recent Posts