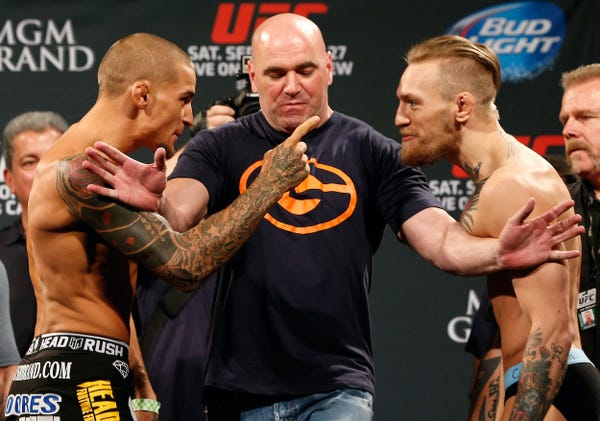 Dustin Poirier said Monday that negotiations for the Conor McGregor fight are "alive," but there's one problem getting it booked right away.

Speaking on "The Fight with Teddy Atlas" show on YouTube, Poirier said that while both fighters and the UFC appear happy with the match itself, scheduling issues have so far stopped the bout from becoming official.

The UFC wants the lightweight fight to take place in January, however, McGregor is adamant that he returns to the Octagon in November or December.

"I know he wants to get another fight in before 2021 and finish this year with a fight," said Poirier. "And that's the problem getting this booked right away like everybody expects.

"They have a list of events already booked with headliners," he said. "I think the UFC is angling for this to be a New Year's fight, somewhere in January.

"And Conor's wanting to fight this year, as do I. I want one more fight this year. I think those things are slowing it down from getting this fight done, but the negotiations are alive."

A loss against McGregor in 2014 hangs over his head, Poirier said

Poirier and McGregor have fought once before, six years ago, when they were both featherweights.

Poirier was the more experienced UFC fighter, but McGregor had won three bouts in the organization after achieving double champion status in the European MMA firm Cage Warriors.

The night belonged to McGregor. He finished Poirier in 106 seconds of competitive action, cementing his reputation as one of the brightest talents in the UFC.

Three fights later, he knocked the long-reigning featherweight champion Jose Aldo out to claim the title for himself, growing his star even further.

Poirier, like McGregor, went on to achieve bigger and greater things after 2014.

In the six years since, Poirier has lost just twice and claimed impressive victories over big-name athletes like Justin Gaethje, Eddie Alvarez, and Max Holloway.

In his most recent bout, a pandemic era win over Dan Hooker, he scored a five-round decision win in a back-and-forth slobberknocker for the ages.

Poirier told Atlas, a former ESPN commentator, analyst, and boxing trainer, that he is a different fighter and person than the 25-year-old who was pummelled by McGregor.

"[The loss is] going to be hanging over my head for sure," he said. "To combat that is my experience and my mindset is different. I'm not a young, mad at the world, mad at the critics, kid anymore. I know who I am. There's no enemy within, so there's no enemy outside.

"I'm comfortable with who I am, I believe in my skills. I think the trash talk [last time] I walked into the combat arena feeling I was fighting more than the man across from me.

"I felt like I was fighting the organization, the fans, the critics. Everybody. The media. I had something to prove to everyone. But I'm more mature than that scenario. This is me versus Conor McGregor.

"I know what I'm capable of and am confident of my skills. It's not even about revenge. It's about life, fighting, goals, and destiny. I'm 2-0 in rematches in my career, I won both of them, and I plan on going 3-0. I'm going to perform.

"I'm not going to go in there and fight off anger. I'm going to fight off skills."