The 20-year-old Youth Olympics golden girl was heartbroken in November after watching her big bro get jabbed into submission by Joe Joyce and left needing surgery on a shattered eye socket. 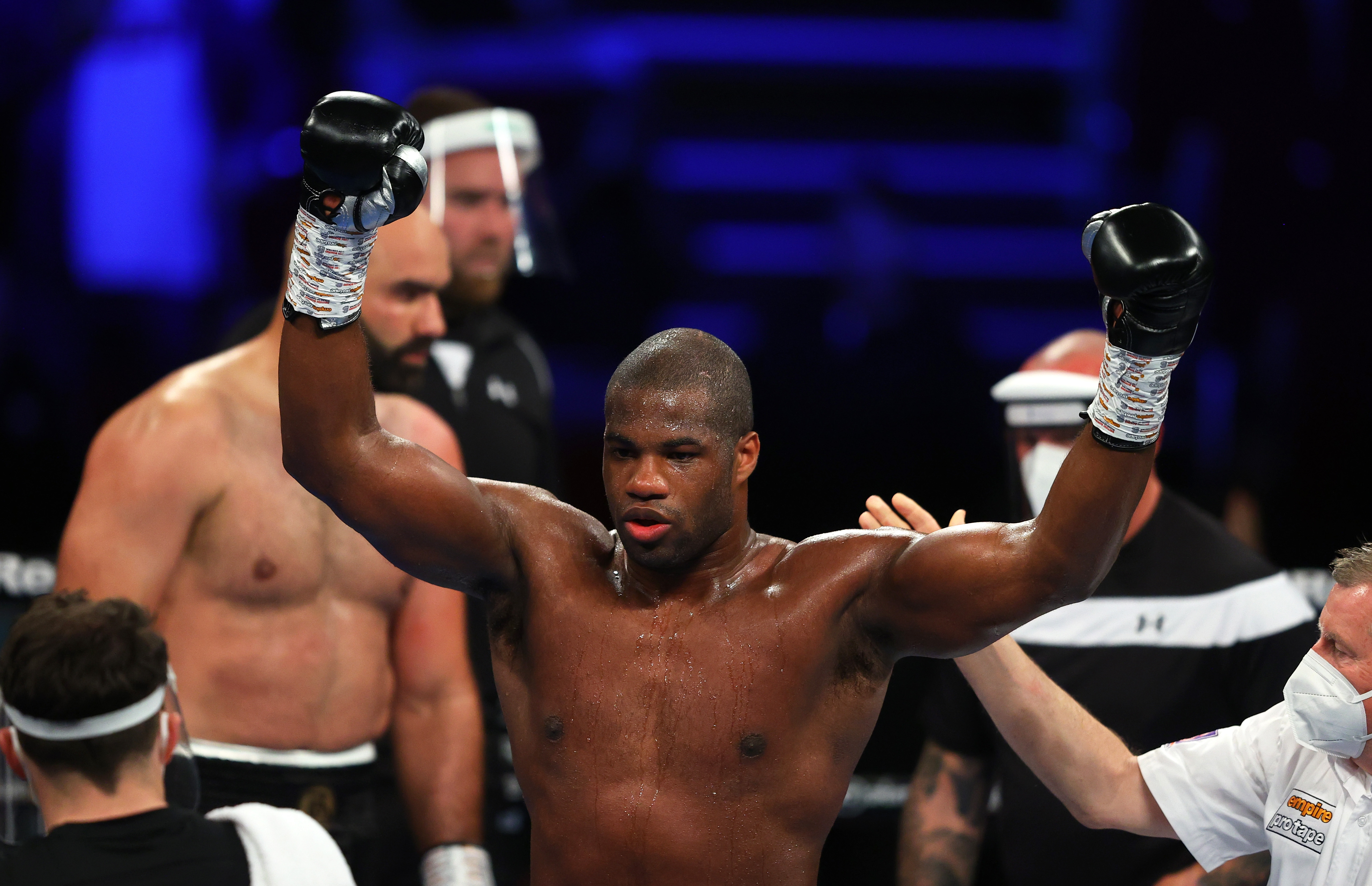 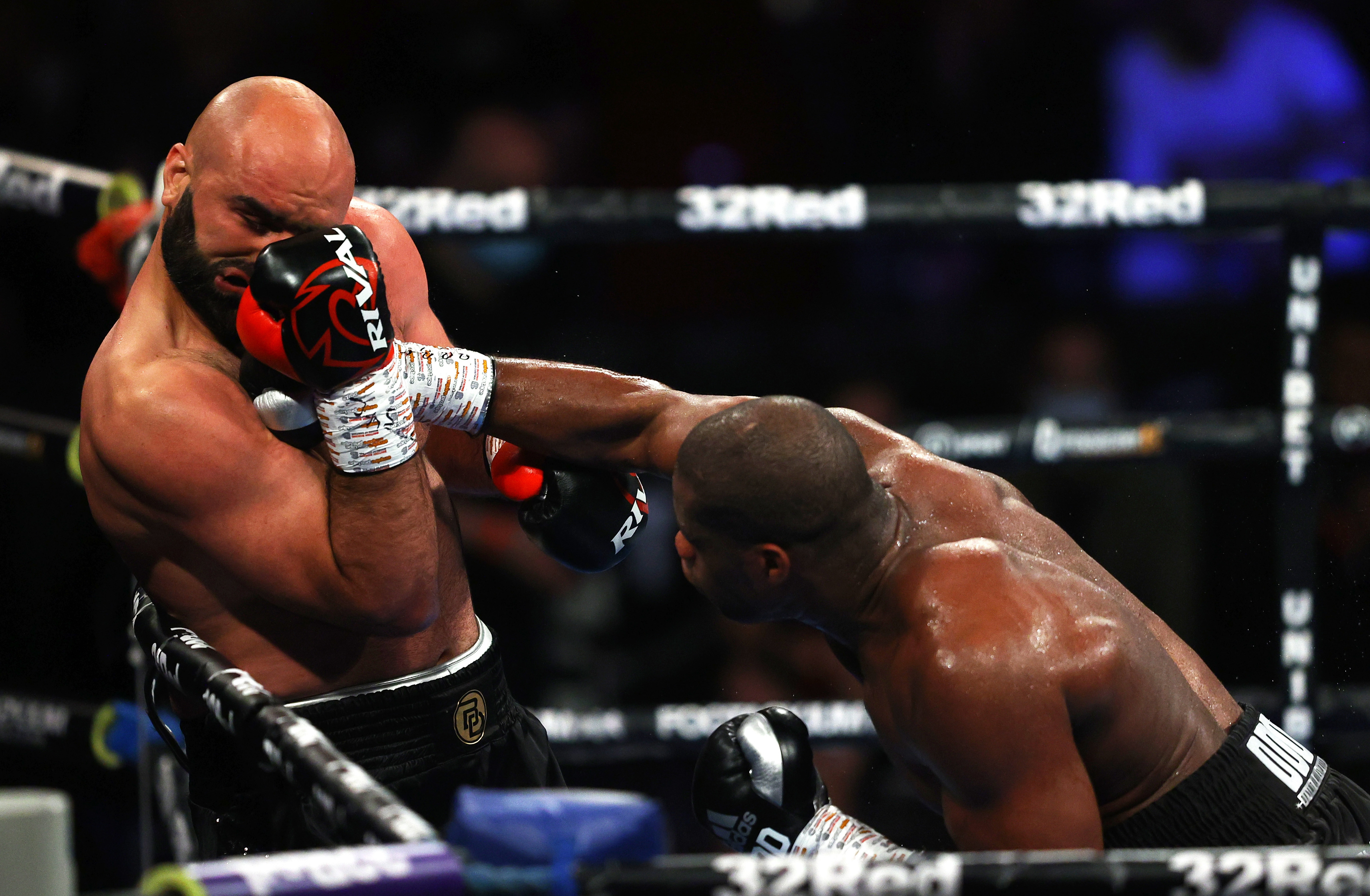 But six months later the lightweight sensation, who had to start her boxing career secretly around London’s gyms disguised as schoolboy Colin, won her second bout at the Paris qualifying tournament to book her ticket to Japan.

And 23-year-old Dynamite Dan blasted his way back into the heavyweight win column by demolishing a 20-2 opponent who towered over him until he was chopped down viciously in the second.

With new trainer Shane McGuigan behind him, Dubious came to the ring to the perfect tune of defiance ‘That’s Life’.

And almost like Frank Sinatra sang he picked himself up, from being flat on his face – and got back in the heavyweight title race – with this high-risk win.

Dubois only really used his piston-like jab in the opener, though Dinu did get one right wrapped around his thick whiskers but it was not concussive.

There seemed to be a sense of nerves from the Londoner in the opener, coming back from such a career-threatening injury.

But as soon as the second started he dropped him with a right hand and it was all over.

Dinu threw out a lazy jab while meaning back on the ropes and a right hand scythed through his dropped guard and smashed into his chin.

Dubois was crowned the WBA interim champion but even his most die-hard fans must know it is a meaningless bauble.

Instead it should be a clear sign that his fractured skull and confidence have healed.

Dubois said: “It’s been a rough ride and I’m glad to be back.

“There were a few thoughts going through my head but I listened to Shane and stuck to instructions. I’m so happy man, it’s great.

“My sister just qualified for the Olympics and I’m glad I’m back, picked up a belt as well.”

When asked if he felt his career was back on track, he added: “Yeah definitely. I want to get back in the mix.

“We’re going to get there.

“I’ll fight wheover they bring for me, I’ll knock them out. I need to have the re-run with Joe Joyce and set it right.”

Caroline would have been leaping all over her Paris hotel room watching the action but she will not be rushing home for the party.

The wonderkid could put her feet up now but wants to win the event and boost her seeding, she roared: “I have come here and achieved what I set out to achieve.

“I did not come all this way to stop now. I know who I have got next and I want to go all the way.”

The Chase’s Shaun Wallace red-faced as he messes up his lines in show blooper
Belgium vs Croatia: Live stream, TV channel, kick-off time and team news for Euro 2020 warm-up clash
Popular News
I’m a 46-year-old skincare pro – I credit an alcoholic DRINK as the secret to my youthful look | The Sun
06/07/2022
Stuart Broad builds up to second Virtual Test with Sri Lanka
26/03/2020
Bindi Irwin Made Last-Minute Changes to Her Wedding Due to Coronavirus Lockdown
26/03/2020
Widow on The Repair Shop leaves viewers sobbing
26/03/2020
Coronavirus lockdown: Global quarantine reveals weird fact about humanity
26/03/2020
Recent Posts