Christine Holgate has received a $1 million payout from Australia Post for her controversial downfall as chief executive over the Cartier watches scandal, with the board saying it regretted her departure but stopping short of an apology.

The negotiated settlement between the postal service and its former chief executive, announced by the parties on Wednesday, draws a line under the spectacular 10-month long corporate feud that engulfed the Prime Minster and piled pressure on his government over its treatment of women. 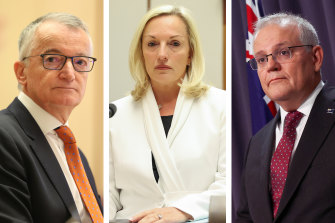 In a joint statement, the parties said that Ms Holgate had released Australia Post from all legal claims and Australia Post was making the payment without any admission of liability.

“Australia Post acknowledges that it has lost an effective CEO following the events on the morning of 22 October 2020. Australia Post regrets the difficult circumstances surrounding Ms Holgate’s departure from her role as CEO,” the statement, released on Wednesday morning said.

Under the settlement, Ms Holgate received $1 million as an “employment termination payment” – the equivalent of about eight months of her final salary – plus $100,000 for legal costs.

Ms Holgate resigned from Australia Post on November 2, 10 days after disclosing to a Senate estimates hearing that she had spent $20,000 on Cartier watches as bonuses for four senior employees for landing a major banking deal. The revelations sparked a now-infamous reaction from Prime Minister Scott Morrison who, on the floor of the parliament, declared she could “go” from postal service if she refused to stand aside for an inquiry into the gifts.

Breaking her silence at a Senate inquiry into the saga months later, Ms Holgate wore suffragette white and framed her treatment through a gendered lens, accusing Mr Morrison of humiliating her and setting in train an ordeal that left her contemplating suicide. The inquiry coincided with intense scrutiny of the Morrison government’s treatment of women.

“I lost a job – a job I loved – because I was humiliated by our Prime Minister for committing no offence and then bullied by my chairman Lucio Di Bartolomeo, who unlawfully stood me down under public direction of the Prime Minister,” Ms Holgate told the Senate inquiry earlier this year.

Throughout the saga, Mr Di Bartolomeo has maintained that Ms Holgate agreed to stand aside for an investigation into the watches and resigned of her own accord before it was completed.

The Cartier watches saga was preceded by a string of revelations last year that plagued Ms Holgate’s leadership. These included her office spending $300,000 on the CEO credit card in 2019-20 and splurging $3000 a day on a reputation manager at the height of the pandemic amid complaints about delivery delays.

Ms Holgate also urged the board to pay out more than $7 million in bonuses to executives last year and came under fire for Australia Post’s intervention on behalf of Senator Pauline Hanson when the City of Melbourne refused to deliver One Nation stubby holders to public housing tower residents.