Britney Spears has had a pretty eventful summer so far, to say the least. In her quest to remove her father as her conservator — and end her long-standing conservatorship altogether — she has made two virtual court appearances; one on June 23 and another on July 14. During the first hearing, Spears told Los Angeles Supreme Court Judge Brenda Penny that she was mistreated and abused by some of the people closest to her, including her dad and her management team. She also said that the conservatorship has forbid her from getting married have having a baby. “I have an [IUD] inside of myself right now so I don’t get pregnant. I wanted to take the [IUD] out so I could start trying to have another baby. But this so-called team won’t let me go to the doctor to take it out because they don’t want me to have any children, any more children,” she said, according to CNN.

Spears also detailed her desire to just go out with her boyfriend, in his car, which she’s also apparently not allowed to do. “I’d like for my boyfriend to be able to drive me in his car,” she said (via CNN). During her July 14 court appearance, Spears told the judge that she wants to charge her father with “conservatorship abuse,” according to Vanity Fair. And, as things in Spears’ case begin to boil over, she appears to be enjoying some new freedoms. Keep reading to find out more. 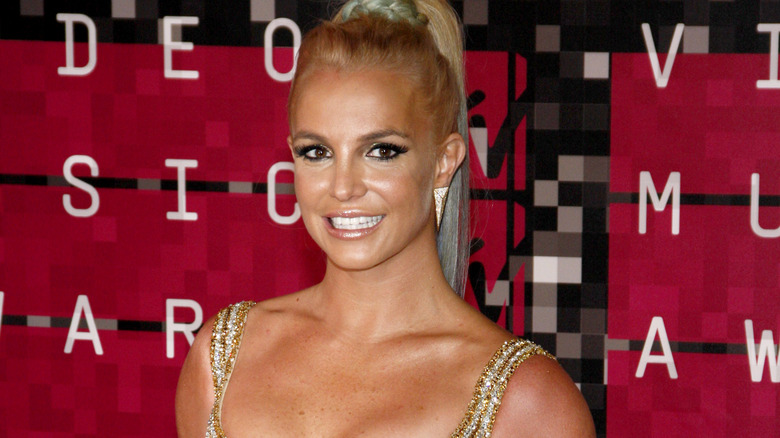 On July 17, just days after her second virtual court appearance, Britney Spears was spotted driving in Los Angeles. According to the Daily Mail, Spears was in a white Mercedes Benz with her boyfriend, Sam Asghari, sitting in the passenger seat, and a bodyguard sitting in the backseat. Although Spears can drive, it’s something that she doesn’t do frequently. According to pop culture Instagram account Diet Prada, Spears is actually forbidden from driving a car under her conservatorship. It’s unclear how Spears was able to take her Benz for a spin, but her fans were so excited to see her out and about having a somewhat normal afternoon with her man.

Speaking of her man, Asghari posted a video of the drive on his Instagram Story, showing Spears’ hand turning up the volume on her song, “Lonely” from her third studio album, “Britney.” “Think of times you made me cry, you had me so confused. I’m tired of trying to leave behind this. What’s a girl to do?” Spears sang while driving down a side street.

Her fans are undoubtedly hopeful that they will see more of her living her life freely in the coming months — and beyond.