Baby suffering from COVID-19 is applauded by hospital staff

Footage has emerged of the emotional moment hospital workers applauded a four-month-old baby who was being taken off a ventilator after being infected with COVID-19.

The baby boy, whose name has not been revealed, reportedly contracted the deadly bug and was hospitalised on 16 March in the Regional Hospital of Malaga, after being transferred from a hospital in Marbella.

The baby, who required breathing assistance, has now left the ICU, with hospital workers on hand to applaud as the equipment was removed.

In a video clip of the incredible moment, a crowd of doctors, nurses and healthcare workers can be seen applauding and cheering the baby through a pane of glass as his ventilator was removed. 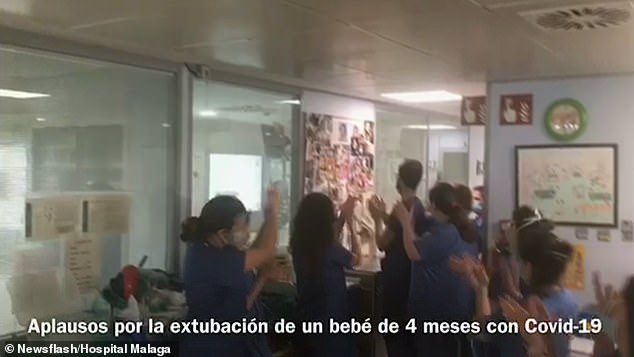 Jose Camacho, head of the ICU at the Spanish hospital, said the baby had responded well to treatment and no longer required a ventilator.

Official sources said the infant is stable and will be sent to a normal ward soon.

Camacho told local media: ‘Fortunately, cases like the baby boy we had in intensive care are exception during this pandemic. We usually treat patients with other diseases or infections from another virus.’

He also thanked medical staff and local residents for their support during the COVID-19 crisis. 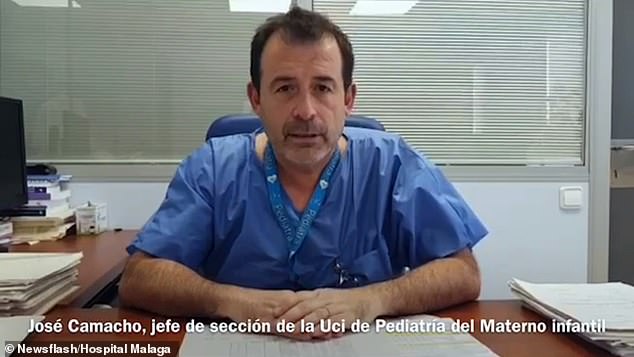 Jose Camacho, head of the ICU, said the baby had responded well to treatment for COVID-19 and no longer needed treatment

Camacho said: ‘Cases like this boy, who no longer needs a respirator, are giving us strength to fight the virus.’

According to the latest figures from the Johns Hopkins University Spain has registered 131,646 cases of COVID-19, 12,641 related deaths and 38,050 recoveries.

Last month, doctors warned that young children and babies are not safe from the coronavirus that has gripped the world with fear.

Experts say the highly contagious infection can still spread between children and youngsters – even though the elderly are most at risk. 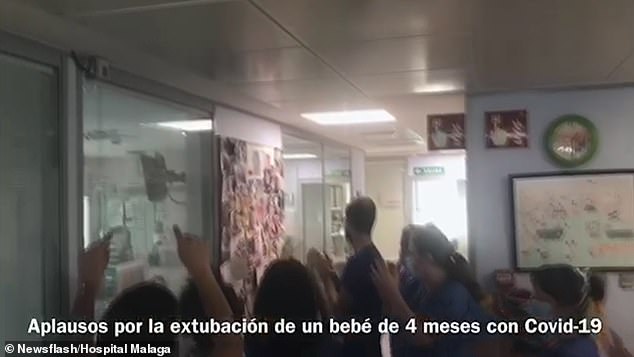 In the video clip, a crowd of doctors and nurses can be seen standing in the corridor of the hospital as they cheer for the child

And they warn the life-threatening illness may cause unusual symptoms in children, such as stomach aches. The tell-tale symptoms are a cough and fever.

A study in China, where the outbreak began in December, found that almost one in ten patients in the country were under the age of 30.

Even babies have been known to get the virus, which can kill people by causing pneumonia and putting stress on organs.

World Health Organization chiefs have said young people are ‘not invincible’ and could end up in hospital ‘for weeks’.

CHILDREN AND VIRUSES: HOW DOES COVID-19 COMPARE?

Viral infections are common among people of all ages but often seem to be concentrated in infants and children.

Viruses can easily spread when children have close contact with each other, which is likely in places like schools and nurseries.

Children get six to eight viral infections each year, according to University of Bristol.

But most childhood viral infections are nothing to be concerned about. They are not serious and get better without treatment, including colds, ear ache, sore throat, vomiting and diarrhoea, and fever with a rash.

Some viral illnesses that cause more serious disease, such as measles, are less common now due to widespread immunisation with vaccines.

But there is not a protective jab for the new coronavirus yet, meaning no one is protected from it. This isn’t expected for at least another year to 18 months

It means there is no herd immunity among the population, which is the resistance to the spread of a contagious disease as a result of vaccination or because a high proportion of individuals have been infected with the disease, therefore becoming immune to it.

Evidence from China suggests that children are most at risk of COVID-19 if they are in a household with someone who has tested positive.

It suggests protecting children who have been in contact with diagnosed cases, which is also the advice for children within a household where someone has SARS – the ‘sister’ of the novel coronavirus.

Experts say a child is more at risk for SARS if they are in an area where SARS is active, or has contact with a person who has SARS. This means living with someone with SARS or kissing, hugging, or sharing cups or eating utensils.

Doctors advise that a child who has been exposed to SARS – which has not been diagnosed since 2004 – should have their temperature and health watched for 10 days.

The child should also stay home from school or daycare, wash hands often, and cover their mouth and nose when coughing or sneezing, University of Rochester Medical Centre says.

Japan announces state of emergency amid coronavirus crisis
Larry David on Bernie Sanders: ‘I feel he should drop out… he’s too far behind’
Popular News
Thousands of people to get £200 direct payment in bank account within days to help with energy bills – how to get it | The Sun
03/07/2022
Stuart Broad builds up to second Virtual Test with Sri Lanka
26/03/2020
Bindi Irwin Made Last-Minute Changes to Her Wedding Due to Coronavirus Lockdown
26/03/2020
Widow on The Repair Shop leaves viewers sobbing
26/03/2020
Coronavirus lockdown: Global quarantine reveals weird fact about humanity
26/03/2020
Recent Posts