For weeks it has been the WA government’s biggest headache as it struggles to deal with an unprecedented crisis, and with the Artania now locked down and under quarantine, local authorities could be forgiven for thinking they’d heard the last of the stricken vessel – at least for a while.

But questions remain over the handling of a coronavirus outbreak on board the ship which has left the state with more than 50 patients to care for. 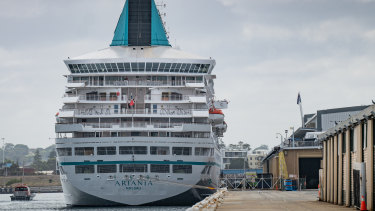 One is why, when ship operator Phoenix Reisen reported 16 passengers remaining on board last week, only 12 were taken off the vessel? Where are the other four?

And is it true that while passengers and crew aboard the Artania were under orders to self-isolate, a party was thrown on the ship?

So far, answers to these questions have not been forthcoming.

By piecing together media statements released by Phoenix Reisen, what's been said during press conferences, and online forums including former Artania passengers, a picture has emerged of a situation that, had preventative steps been taken earlier, may never have become so serious.

On March 24, the MV Artania was Fremantle-bound for what was supposed to be nothing more than a refuelling stop.

A state of emergency had been declared by Premier Mark McGowan the week before, and unease over cruise ship arrivals was already high.

The Ruby Princess, which had docked in Sydney just days earlier, was already shaping up as the benchmark of what not to do with a passenger vessel during a global health emergency.

The Premier already knew the Magnifica and Vasco de Gama cruise ships were heading his way when the situation aboard the Artania changed and an urgent request for help was made by its captain, Morten Hansen.

Despite news the ship was carrying 25 passengers with suspected COVID-19, he stood firm.

He had already seen off the Magnifica – not without its own drama – and plans were in place for Vasco de Gama passengers to be taken to Rottnest for 14 days of quarantine.

“The Artania [… needs] to leave and go back to [its] port of origin and leave as soon as possible,” Mr McGowan told reporters on March 25.

“I will not allow what happened in Sydney to happen in Western Australia.”

The following days during what the Premier referred to at the time as a “fiasco” involved ever-changing plans, pleas for Commonwealth assistance, and mercy flights home for more than 800 Artania passengers.

By the time the specially chartered Condor jets took off from Perth airport last Sunday carrying what was believed to be the entire complement of passengers from the stricken ship, Mr McGowan must have thought his Artania-related woes were about ready to be farewelled, too.

Then Christian Porter went on 6PR’s morning show with Gareth Parker and dropped a bombshell.

It should have come as no surprise to anyone paying attention to the ongoing cruise ships crisis, but when the Australian Attorney-General told 6PR listeners last Wednesday morning some passengers had remained on board the Artania, all hell broke loose.

Phoenix Reisen had made public the very same information two days earlier in a press release published on its website.

The statement couldn’t have been more clear: “16 travellers also decided to stay with the crew on board [the] Artania under the care of Captain Morten Hansen and cruise director Klaus Gruschka."

It was curious enough when just hours after Mr Porter made the on-air claim, Premier McGowan said he had only found out about the remaining passengers “last night or this morning”.

But even more curious was the discrepancy between the number of passengers Phoenix Reisen said had stayed on board – 16 – and the number Mr Porter, and later Mr McGowan, said remained – 12.

Later that afternoon, after a WA government spokesman confirmed to WAtoday the number of remaining passengers had indeed been 12 – and after the same 12 passengers were taken to an inner-city hotel to be quarantined for 14 days – the question had to be asked, weren’t there now four passengers for whom nobody could account?

When asked to clarify how many passengers had stayed on board the Artania after more than 800 were flown home, the same spokesman said he understood the Premier was told of “12-15 passengers that remained on board yesterday”.

Phoenix Reisen was asked to either confirm or amend the number of passengers they said had stayed on board. No figure was provided.

Instead, WAtoday was pointed to the company’s website and its most recent media statement, which said only that “the remaining passengers had to … be taken ashore”.

'The safest thing would have been to stop the trip'

March 13 was a red letter day in terms of Australia’s pandemic timeline.

While the national tally of confirmed COVID-19 cases in the country sat at just 156, it was on this day things really started to escalate.

What began with a few cautious announcements early in the morning ended with tens of thousands of events cancelled. For many it was the last day they worked from the office.

It was also the day 618 guests joined those already on board the Artania in Sydney.

The ship was still in harbour two days later when its operators were told South Pacific ports had been closed to cruise ships. Those aboard were given the opportunity to fly home, and 199 passengers disembarked on March 16.

At 7pm on March 18, the ship departed for Fremantle with 832 passengers and 515 crew on board.

The following week at sea, while Australians were adjusting to social distancing, self-isolating, and constantly sanitising their hands, Artania passengers were dining and socialising together, according to since-evacuated guests in an online chat forum.

A party went ahead even after it was known unwell patients were on board and passengers had been told to stay in their cabins.

Last week WAtoday reported an entertainer on the Artania continued to perform and mix with guests while suffering with a sore throat.

Of most concern was a claim by one passenger that a sick doctor aboard the vessel had been “from cabin to cabin, absolutely unprotected”.

Disgruntled passengers are now blaming Phoenix Reisen, with some calling the cruise ship operators “grossly negligent”, and others questioning why they were allowed to board prior to arriving in Western Australia at all.

“The safest thing would have been to stop the trip in Sydney,” one wrote.

“Without Phoenix we wouldn’t be in this situation.”

Numerous requests for comment on why passengers were allowed to embark in Sydney and questions surrounding claims of negligence have been sent to Phoenix Reisen.

So far, no response has been received.

Docked and locked, the Artania stays

Before the Artania cruise ship docked in Fremantle a little more than a fortnight ago, the Premier was on guard.

“We may well need Commonwealth support to ensure that they don't declare an emergency and try and get all their crew and passengers off,” he said on March 25.

At that time WA had 205 confirmed cases, up from just 14 on the day the Artania left Sydney.

In the week it took the vessel to arrive in Fremantle, Australia recorded 2267 new cases.

On March 28, when the WA government first started providing specific figures for Artania-related cases, there were nine being treated in Perth hospitals. There are now 53.

As of Monday morning there were 5697 infected people in Australia, with estimates 10 per cent of these cases can be directly linked to cruise ships.

Over the weekend a criminal investigation was launched to determine whether Ruby Princess operators were “transparent” with authorities about ill passengers.

The Artania will remain locked down at Fremantle port for at least the next 12 days.

In a video posted on YouTube three days ago, Captain Hansen said his ship had been chosen as a "master plan of how to deal with COVID-19".

“Most importantly, the Artania will stay here in Fremantle," he said.

"Maybe we can set an example for many other cruise ships around the world."