Apple could be preparing to release its long-awaited AirPods Studio over-ear headphones and other products later today, if rumours are correct.

An internal Apple memo told service providers to prepare for new product descriptions and pricing on December 8 at 13:30 GMT, according to MacRumours.

This is a time Apple often send out press releases about new hardware – including the 13-inch MacBook Pro in May and the second-generation AirPods in March 2019.

A number of sources, including reliable Apple leaker @L0vetodream predict this latest hardware release will be for the long-predicted AirPods Studio headphones.

The over-ear version of the popular AirPods are expected to feature sensors which detect when the headphones are on the head or neck of the wearer, and which way round they have been placed on the head to stream audio to the correct ear. 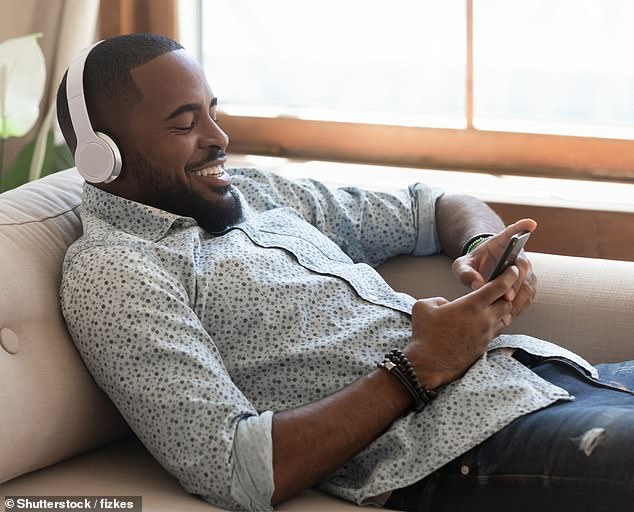 Apple could be preparing to release its long-awaited AirPods Studio over-ear headphones and other products later today, if rumours are correct. Stock image

Other rumours suggest we might get a new version of the Apple TV with gaming controller, long-rumoured AirTags and an Intel-based MacBook Pro.

Rumours about the AirPods Studio have been around for a long time, they are expected to be ‘high-end, noise-cancelling’ headphones for a premium market.

Rumours were sparked by leaked images of the alleged device and a new icon in iOS14.3 beta that resembles the image.

L0vetodream has previously claimed there would be a Christmas surprise from Apple, suggesting it would be a ‘Winter exclusive, good for winter’.

Many saw this as suggestion that there would be a fourth event – following the previous announcements of new iPhones, iPads and Silicon Macs.

However, the leaker rolled back slightly on the idea of an event by tweeting: ”I did not mention what exactly is the ‘Christmas gift’, and the date.’

If it turns out to be the release of the long-awaited AirPods Studio, it could tie into the pre-Christmas gift – there are also rumours of a cheaper AirPods lite.

It is believed the AirPods Studio headphones, which have not yet been announced by Apple, will automatically pause music when they are removed.

The current AirPods have a similar feature called ear detection which pauses the music when the earphones are removed.

Another sensor dubbed ‘neck detection’ will likely keep the headset turned on but pause the music when the earphones have been taken off and are resting around a wearer’s neck.

A separate gadget will detect the difference between left and right ears and direct the stereo sound accordingly, according to reports.

This will do away with any left or right labelled headphones as the sensor will ensure there is no ‘wrong’ way to wear them. 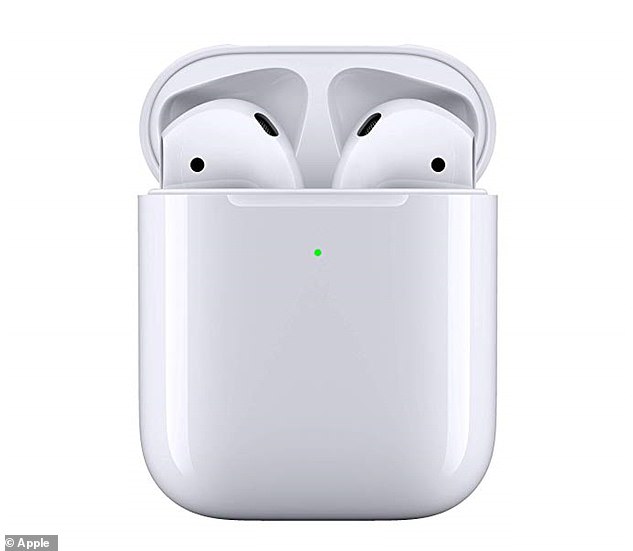 Rumours abound about potential over-ear Apple headphones which will build on the huge success of its AirPods (pictured). It was reported earlier this year that the over-ear listening device would be called AirPods Studio

According to sources, Apple’s new headphones will have Active Noise Cancellation and Transparency Mode just like its in-ear AirPods.

The headphones are expected to be available in leather and also lightweight fitness-style materials, Bloomberg reports.

No price has been announced yet but rumours claim they could retail at around £261. AirPods Pro are currently about £250.

As well as the rumours of an upcoming announcement, a number of other things are pointing to a pre-Christmas release.

This includes the fact Apple has a history of removing rival products from its stores before an upcoming product launch.

Apple has conspicuously stopped stocking headphones and speakers made by rivals, such as Bose, Logitech and Sonos in its stores. 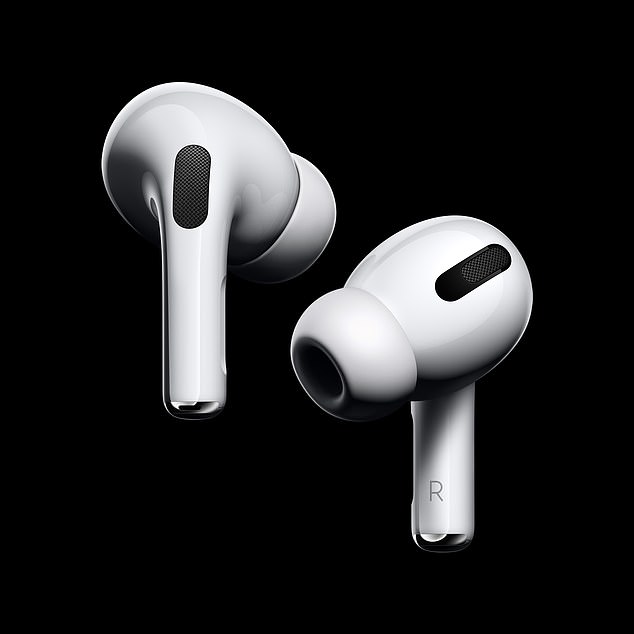 ‘AirPod Pro Lite’ will be cheaper than its predecessor (pictured at Apple’s AirPods Pro) that costs $249, but without the high-end features like active noise cancelling and adaptive equalization

The California-based tech giant has long sold high-end audio equipment, but these third-party items were removed in September, according to Bloomberg.

Other rumours for products that could be announced by Apple later today include the 6th generation of the Apple TV or a smaller dongle version of the TV to compete with the Amazon Fire TV stick.

However, L0vetodream says it is unlikely Apple will release a new TV box this year.

The other product that could come under the ‘Christmas suprise from Apple’ category is the long-rumoured AirTags – little tiles that can be attached to any device and tracked within the ‘Find My’ app.

With the memo seen by MacRumours telling partners to prepare for AppleCare changes, it is likely any product will come under AppleCare so is likely to be notable hardware – which could include AirPods Studio.

Related posts:
Own a Galaxy S10 or S20? Samsung’s Android 11 update is coming soon and here’s what’s new
‘Star Trek’ Cast Members To Hold Fundraiser For Georgia Senate Runoff
Popular News
What classic girl band stars did next – arson, cocaine and unspeakable tragedy
06/05/2021
Stuart Broad builds up to second Virtual Test with Sri Lanka
26/03/2020
Bindi Irwin Made Last-Minute Changes to Her Wedding Due to Coronavirus Lockdown
26/03/2020
Widow on The Repair Shop leaves viewers sobbing
26/03/2020
Coronavirus lockdown: Global quarantine reveals weird fact about humanity
26/03/2020
Recent Posts
This website uses cookies to improve your user experience and to provide you with advertisements that are relevant to your interests. By continuing to browse the site you are agreeing to our use of cookies.Ok