Warning: This story contains many spoilers about the series finale of Mare of Easttown.

In retrospect, the clues about Ryan Ross were there all along.

The sudden outburst of violence against a bullying classmate. The hushed conversation with his father late at night. The look on his face when brilliant detective Mare Sheehan (played by Kate Winslet) showed up at his house in the penultimate episode. 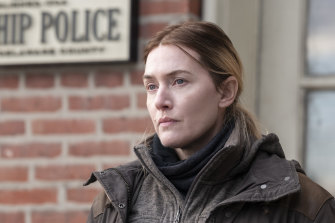 In the gripping finale of Mare of Easttown, Kate Winslet’s detective finally discovers who killed the young single mother Erin.Credit:HBO/Foxtel

But still, who would have predicted that middle school student Ryan (Cameron Mann) was the one who shot and killed Erin McMenamin (Cailee Spaeny), the young single mother who was found dead in the first episode of Mare of Easttown, the HBO crime drama airing on Foxtel that has been lighting up social media the last seven weeks?

OK, despite the fact he was a kid, plenty of viewers guessed it was Ryan. But they also guessed it was Dylan, or Brianna, or John, or Billy, or Richard, or Deacon Mark, or the myriad other suspicious characters that made up the Mare universe. The mystery was the main reason the riveting crime drama, which concluded Sunday night, resulted in countless recaps, memes and fan theories online, and inspired a Saturday Night Live parody after only three episodes.

In the finale, viewers finally learned that Ryan’s father, John (Joe Tippett), was the one having a secret affair with Erin and was the father of her baby – yes, John, more than 20 years older than Erin and her first cousin once removed. John came clean to the police and confessed to killing Erin, but there was soon a major twist: Mare discovered that after Ryan found out about his father’s infidelity, he stole a gun and confronted Erin, trying to scare her into ending the affair. When Erin tried to grab the gun away from him, he accidentally shot her. Ryan frantically called his father, who promised him that he would take care of everything and it would be their secret forever.

Although not so much with Mare on the case. Winslet really earned that leading actress Emmy Award that she will inevitably win as she processed the fact that the killer was Ryan, the son of her longtime best friend, Lori (Julianne Nicholson). And Nicholson earned the supporting actress Emmy that she will probably win, when she broke down after Ryan’s arrest and turned her fury on Mare.

“Why couldn’t you just leave it alone?” she said, sobbing hysterically that it was an accident, and that John had been willing to take the fall for their son. “My whole family is gone now because of you.”

The series ultimately tied up much more neatly than most crime dramas: Mare and Lori eventually had a wrenching scene in which Lori melted down crying in Mare’s arms. Mare said goodbye to her short-term fling Richard (Guy Pearce), who really was just a nice guy all along. Mare won custody over her grandson, Drew, in a heartbreaking moment after finding out Drew’s mother was going to rehab. And in the final minutes, Mare gathered the strength to go back into her attic, the spot where her son took his own life, a critical step in her own grief and healing process.

That only scratches the surface of the number of storylines that took place during the series set in Delaware County (“Delco”), a suburb outside of Philadelphia, where all the characters seemed to be related to each other and have extremely complicated pasts. But those intertwining plots are one of the key reasons the series grew its audience every week: the penultimate episode more than doubling its premiere night ratings back in April. Mare has been the top series streaming on HBO Max for three straight weeks, the network said, adding that it is the only other series besides the twisty Hugh Grant/Nicole Kidman whodunit The Undoing that grew every week in its first season. 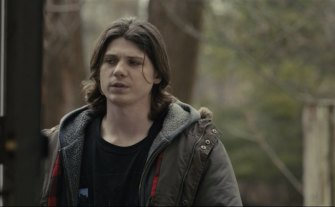 Dylan Hinchey (Jack Mulhern) was one of the prime suspects in Mare of Easttown.

“We recognised right away that this was a crime drama on the face of it, a great story with twists and turns and a shifting lens on who the perpetrator might be from episode to episode,” said Nora Skinner, the senior vice president of HBO programming who was the lead creative executive on the series. “But it was also married to this beautiful community drama that was layered and textured and really about a place and a group of people, a community where everyone has a shared history.”

While Skinner and her fellow HBO executives were pleased with the growing ratings, they saw the show quickly joined the grand tradition of Sunday night HBO dramas – The Undoing, Big Little Lies, True Detective, etc – that viewers obsess over on social media, to the point where the discourse takes on a life of its own. On May 8, the eve of the fourth Mare episode, Saturday Night Live aired a parody titled Murdur Durdur.

Skinner, watching SNL at home as she usually does, was shocked to see the sketch, and messages started flying between HBO staffers. Skinner said she thought it was “the funniest thing in the world” and loved how the skit writers picked up on small details of the characters (and the fact that Philadelphia Flyers mascot Gritty made a cameo). That was when they realised the series had also “ignited a bit of a cultural conversation”. 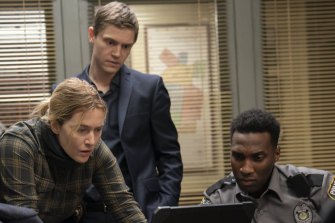 Mare of Easttown joins a long list of HBO thrillers that invites viewers at home to solve a mystery.Credit:HBO/Foxtel

“We also got a sense of that on social media with the way that the fans embraced the show and were writing about it with such love and passion and excitement and ownership,” she said. “That’s just what you’re looking for with viewership – keep the offline conversation going from week to week.”

Sure enough, memes flew around social media, particularly about Jean Smart’s dryly captivating performance as Mare’s mother and the devastation over the fate of Evan Peters’ charming detective Colin Zabel, who was brought in to help Mare on the case. Not to mention the discussions the show sparked about Wawa, the regionally beloved convenience store chain known for its sandwiches. (McKinnon in the SNL sketch: “Would youse guys quit eatin’ Wawa hoagies over the dead body, please?” )

Skinner has enjoyed reading it all, including the many fan theories, and hopes viewers are satisfied by the finale. The goal was for people to feel like the conclusion made “emotional sense,” she said. Though the endings of HBO crime shows are often hotly debated, the Mare finale brought everything together and touched on themes that built week to week.

“It reflects, in a way, this heartbreaking and human thing, essentially because Ryan wanted to keep his family together … and what Mare has gone through to keep her family intact,” Skinner said. “Across all the characters, there’s this beautiful reflection on people struggling to figure out death and trauma and loss – and sort of comes back to the idea that in this community, the way that people deal with loss and death is with love, understanding and mercy.”

Mare of Easttown is on Foxtel on Demand.

Find out the next TV, streaming series and movies to add to your must-sees. Get The Watchlist delivered every Thursday.