It came as Piers reposted a video of an interview shared by Dan Walker, which saw him speaking to Mike Lynch of the National Union of Rail, Maritime and Transport Workers (RMT).

The clip, which saw the pair discuss the ongoing transport strikes in the UK, was captioned: “We live in the age of the jabby, confrontational interview & the RMTs, Mick Lynch, has had a few of them.

“If you treat people with respect, you can still ask tough questions & get decent answers allowing your audience to make their own minds up @5_News”

Along with his retweet, Piers added a string of laughing face emojis and wrote: “Is there anyone more deluded in world television than Desperate Dan.. the world’s most boring interviewer.” 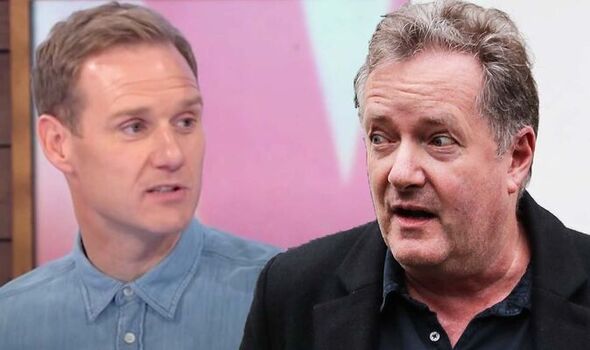 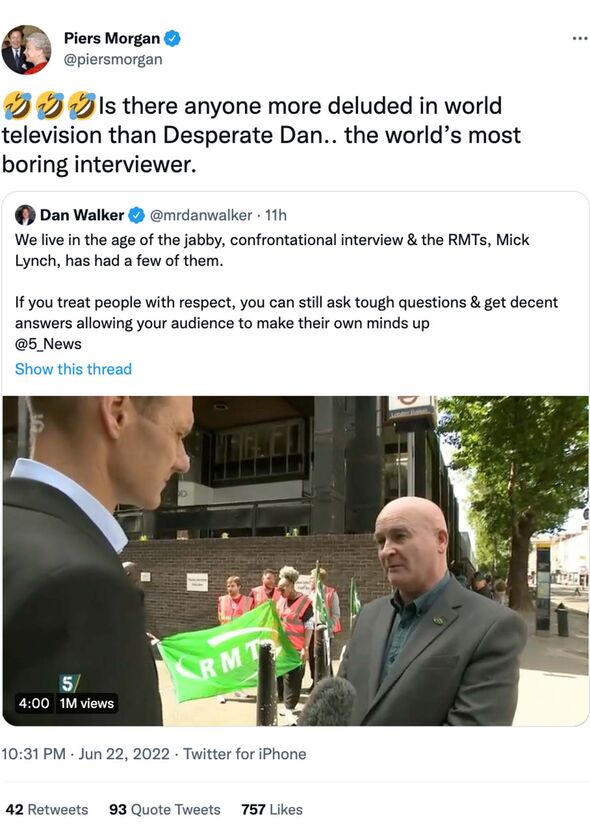 Dan hit back: “Why is it ‘boring’ to let someone actually speak rather than shouting over them all the time?” along with three laughing emojis.

Piers went on to redirect his attack by aiming a dig at the BBC, claiming Dan left the broadcaster because “even by their standards” he was “a mood-hoovering dullard”.

The TalkTV host penned: “Mate, I had to leave GMB for being too exciting/dangerous.

“You had to leave the BBC because even by their standards you’re a mood-hoovering dullard. 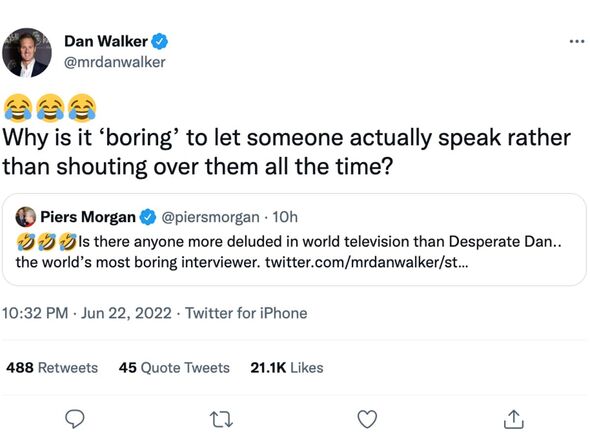 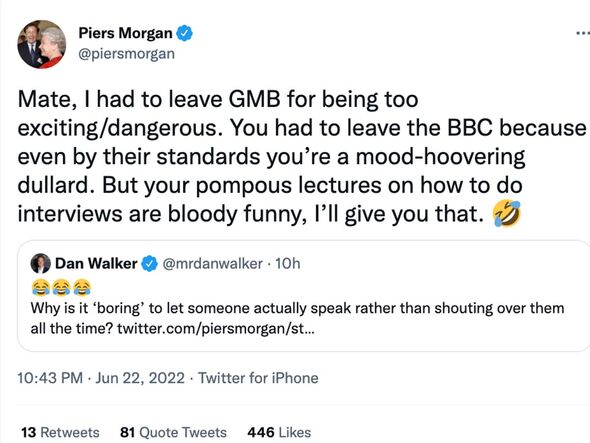 “But your pompous lectures on how to do interviews are bloody funny, I’ll give you that.”

Other social media users were quick to reply to the feuding presenters and weigh in on the controversy.

Diane65883284 said: “Piers what has Dan done to make you so bitter. He is genuinely a good chap. If you have a genuine reason for not liking him, say why.”

AmigaBoing typed: “Between the 2 of you, I would happily be interviewed by Piers since he is the better interviewer, much more professional, and knows how to handle his guests”

Piers had previously publicly hit out at Dan, with a recent rant blasting the former BBC Breakfast presenter as “Mr Modesty”.

Last week, Piers criticised Dan for speaking about himself in the third person in a recent interview.

Piers shared a screenshot showing the excerpt of the interview where Dan explained his signature style when delivering the news.

He then added: “Nothing better emphasises this humble claim by Mr Modesty ⁦@mrdanwalker⁩ than talking about himself in the third person, in his 876th recent interview about himself….”

Prior to that, Piers fired back at Dan after he tried to jokingly mock him, as he pretended to storm off the Good Morning Britain set after a heated on-air argument.

He reacted to an article that read: “Dan Walker poked fun at his rival Piers Morgan by jokingly storming out of his Good Morning Britain interview this morning.”

The broadcaster penned: “He couldn’t even do this better than me…”