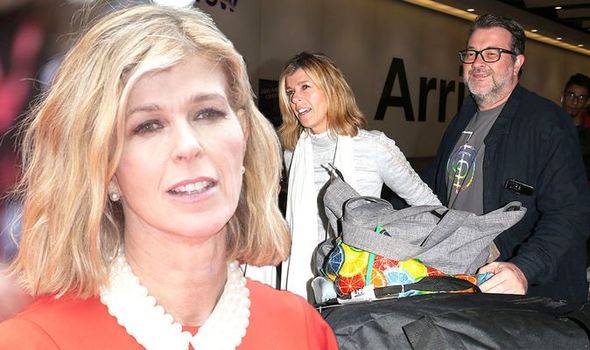 Kate Garraway, 52, is self-isolating with her two children while her husband Derek Draper, 52, battles the coronavirus in hospital.

According to The Sun, the Good Morning Britain presenter, who also has symptoms, is “sick with worry” about her other half.

The former Labour advisor was taken to hospital on Monday, where he tested positive for COVID-19.

A source told the publication: “This is a desperate situation for Kate who is sick with worry about Derek’s health.

“He is intensive care battling coronavirus and for obvious reasons she is beside herself.”

The insider continued: “Kate has symptoms herself too but they are mild so she is self-isolating at home with the kids.

“She is obviously off TV too. Everyone at GMB is so worried for her.”

A spokesman for Kate said: “Kate’s husband, Derek Draper, has been taken to hospital and is being treated in intensive care with a confirmed case of COVID-19.

“He was admitted on Monday and has since tested positive for the virus.

“Kate, hasn’t been tested, however she has also been displaying mild symptoms, also since Monday, and as a result has been on strict isolation with her children at home.“

The presenter recently opened up about her fears after meeting Prince Charles at the Prince’s Trust Awards just days before his coronavirus diagnosis was confirmed.

Kate said: “I actually saw him on the 11th of March. It was the first day he’d stopped shaking hands, and we did the namaste greeting at the Prince’s Trust.”

As footage of their meeting played on GMB, she continued: “We’re relatively close there, as indeed were all the other people that were involved in that.

“I don’t have any symptoms, so I’m not blaming him for anything at all, but people are going to be concerned.

“He’s a man that meets a lot of people.”