These Tiny Night Lights Lull Me to Sleep Like a Baby

Picture this: You're finally in bed after a long day of working at home, there's 15 minutes left of Tiger King, and your eyes are starting to feel heavy. You turn over to your partner and coo, "Babe, can you please turn off the lights?" Neither of you wants to leave the soft folds of your bed sheets and perfectly fluffy pillows, but someone has to be the sacrificial lamb. Now, imagine the same scenario where neither of you has to exit the warm cocoon. Instead, a self-dimming, warm light lulls you both to sleep as the credits start to roll. The. Dream.

If you have no idea what I'm talking about, that's totally fair. Allow me to introduce you to The Casper Glow Light. I wrote about them earlier this month, but with coronavirus precautions in full swing, they've quickly become a staple in my new wind-down routine. The Glow Lights quickly trick my mind into off-mode after spending hours hunched over my laptop in a dimly lit apartment (who would ever think I'd miss working under fluorescents?). 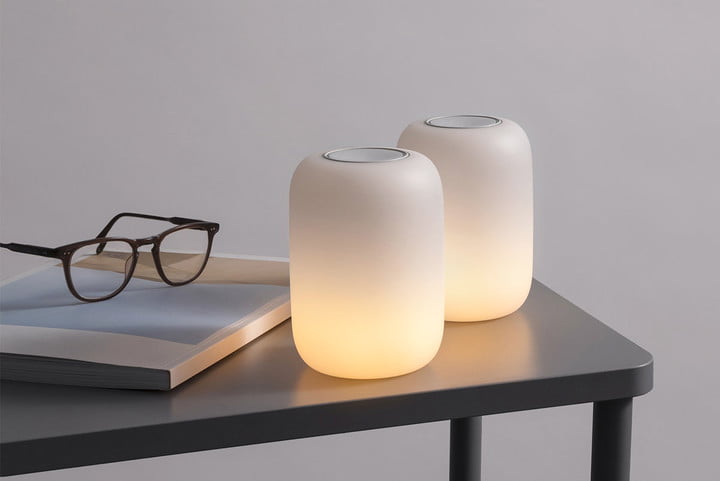 These clever night lights are about the same size as my two-year-old succulents, and they are unlike anything else I own, making them one my favorite sleep discoveries. My home is the furthest thing from "smart"—for one, I'm paranoid of having too much tech in the house and for two, I think having a Siri or Alexa can be more hassle than they're worth. But I made an exception to bring these little cuties into my place while testing products for Sleep Month—and what first sold me was the fact that, well, you can name them.

Before the lights arrived, I felt like any expecting parent would. I had a running list of names, but it wasn't until they were fully charged and glowing that I had my epiphany. It was like they woke up and spoke to me. They come with preset names when you first sync them to the Casper App—I believe mine were Soho and Broadway—but I quickly changed them to Lux and Lumin (Latin names, obviously, because they're chic) and grouped them as Solaris. (PS: The more Glow Lights you have, the more groups you can create.) Maybe it sounds silly to you but these were never just lights to me. I don't have room for pets (or kids for that matter) in my current New York City apartment, so personifying these inanimate objects is as close as it gets for me and my boyfriend. And just as my mother mixes up mine and my brother's name, I regularly forget who Lux and Lumin are (they look so alike…) but I love them both equally.

They Glow up so fast. #casperglow

One of the most glorious things about the Casper Glow Light is that everything is synced to an app. It's super easy to turn them on or off with a single tap. You can manually adjust the brightness by giving the lamps a gentle twist, or if you're like me, you can use the digital controls and call it a night. I like to play with the settings—adjusting the brightness to my mood (from 'Not bright at all' to 'As bright as can be') and setting timers (15 minutes to 90 minutes) for when I want to sleep. You can also set wake-up alarms, which slowly fill your bedroom with soft light in the morning as opposed to the stress-inducing sound of a phone alarm going off at 6:30 a.m.

We’re Glowing. The Casper Glow is one of @time’s Best Inventions of 2019.

Other than setting timers to lull me to sleep or slowly wake me up, another way I get to use out of the Glow Lights is by using them as reading lamps. As mentioned, the lighting situation in my apartment is kind of dark—think moody, warm light—which makes it hard to read in the evenings. Since the Glow Lights are portable, I can keep one by my side or even hold it in my hand to illuminate the pages. The lights are also great for running into the bathroom or scurrying into the kitchen in the middle of the night. I can just give them a little shake and be on my merry way. Another great thing is that they hold their charge—unlike batteries on other home tech products I've tested. I'll usually leave my Glow Lights on their charging dock when not in use, so they tend to last a few days without needing a recharge.

At $129 per light (or $229 for a set), they are quite pricey. You could buy a pretty, decorative table lamp for that kind of money. But seeing as how I use them every night and they actually make my life easier, I find the cost truly worth it. Ideally, I'd own another set so they could all be friends. Plus, they'd make a great gift. Every person I had over before social distancing was enamored by these little babies, asking me where I got them. I'll leave it at this: We're all spending much more time inside right now, and if you need some help easing into this new dystopian reality of ours (or just want to make your home smarter this year), the Casper Glow Light is the way to go. Thank me later when you've picked out your names.

Sleep is a $70 billion industry—we throw our money at a dreamier night's rest, promise ourselves we'll prioritize it, and then gripe when we're still, inevitably, so tired. Despite our collective obsession with sleep, we seem totally unable to get more of it. In fact, we're clocking fewer hours than ever. So, this month, we're taking a look at what's getting in the way—and what to do about it.