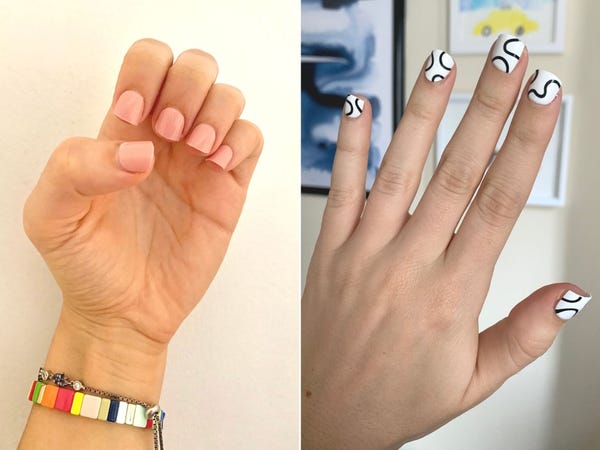 Say hello to my fingernails, which live at the corner of "chipped" and "need attention." 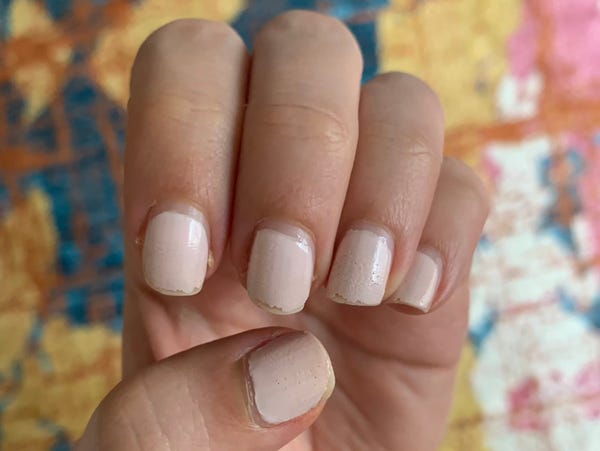 Like many others, it's been a while since I've had a salon manicure.

While many states across America have lifted COVID-19-related restrictions on nail salons, I have yet to make an appointment and have been overall content with my at-home spa sessions.

That is, until a few days after my DIY manicure when my nails start looking like this, which makes me want to completely remove the polish and start again. The cycle continues, and I'm left with the same chipped nails every week.

That's why press-on nails are becoming the next big beauty trend for at-home self-care. 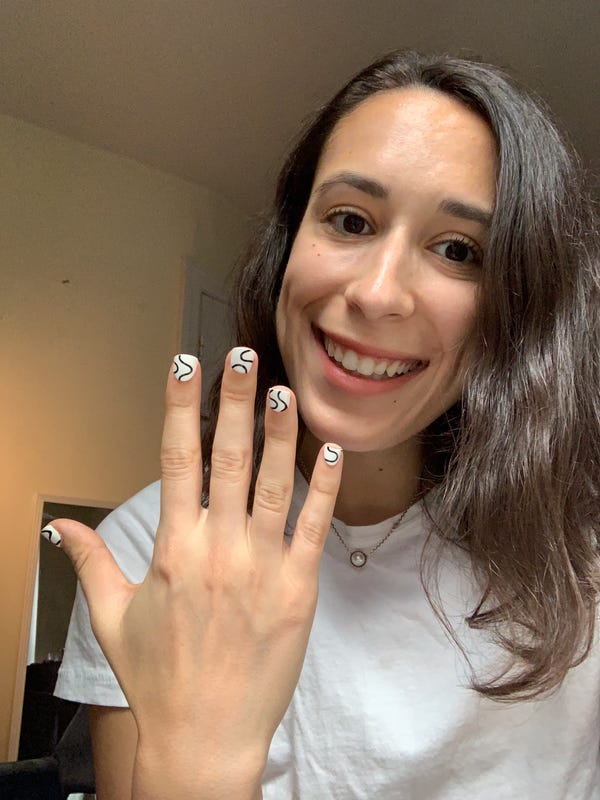 Recently, I've noticed that press-on nail designs are having a moment, as they make for a less messy and more artful at-home manicure.

In fact, Google searches for press-on nails increased significantly between March and May, likely pointing to how people have looked for ways to re-create salon-worthy regimens at home.

Some brands have picked up on the idea. For example, the Brooklyn-based salon Paintbucket released its own line of $15 nail wraps, and Chillhouse, another salon in New York City, launched a collection of $16 press-on nails called Chill Tips.

The concept of faux nails isn't anything brand-new — it's said that artificial nails were created in the 1950s by a dentist who broke his nail at work and replaced it with dental acrylic.

There are also plenty of press-on nail products available on Amazon and at drugstores, which offer the same (and genius, if you ask me) concept: already-painted nails that can be applied over one's natural nails.

I dove into the world of press-on nails with a set of Chill Tips, which comes with plenty of nail pieces, a wooden manicure stick, and a small tube of glue. 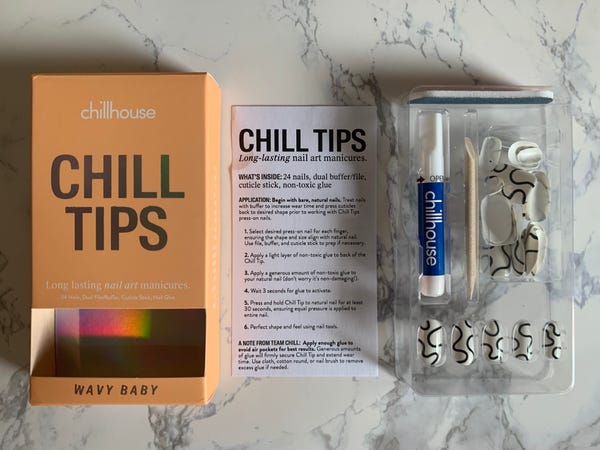 The Chill Tips nail kit is $16 and comes from the salon Chillhouse, which is known for offering manicures in unique and intricate designs.

In August, when the salon released its version of press-ons, I knew it would be the perfect opportunity to sport some of its signature nail illustrations, which I've long admired from afar and on Instagram.

The Chill Tips instructions were straightforward: file the faux-nail piece to size, buff the actual nail surface, and apply a layer of the kit's non-toxic glue to the back of the product, as well as on the nail itself.

Before touching the glue, I spent about 40 minutes using clippers and a file to shorten each design to my natural nails. 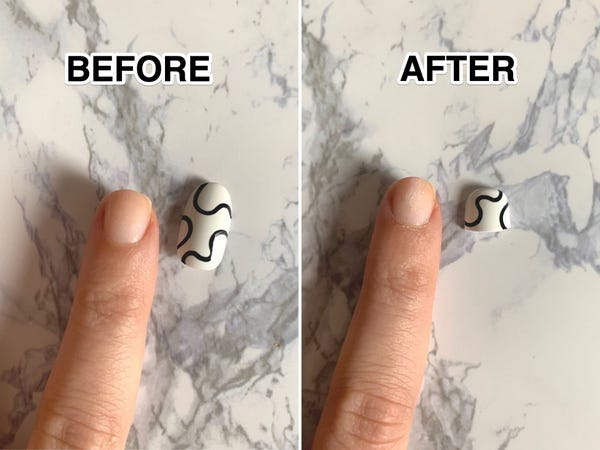 I've never been one to have a hefty fingernail surface area, so I wasn't surprised that the Chillhouse press-ons were a lot longer than my natural nails.

Using the kit's miniature file and buffer, plus a pair of nail clippers I already had, I did my best to trim the nail pieces. The Chill Tips nails are bendable and easy to work with, so this wasn't too difficult.

The trimming process turned out to be a bit of a perfectionist's nightmare, but I decided that the time I spent sizing each design to my finger was equal to (and less frustrating than) the time it takes for regular polish to dry.

Once the designs were sized to my fingers, I glued them on — and voila! I had an at-home manicure in less than an hour. 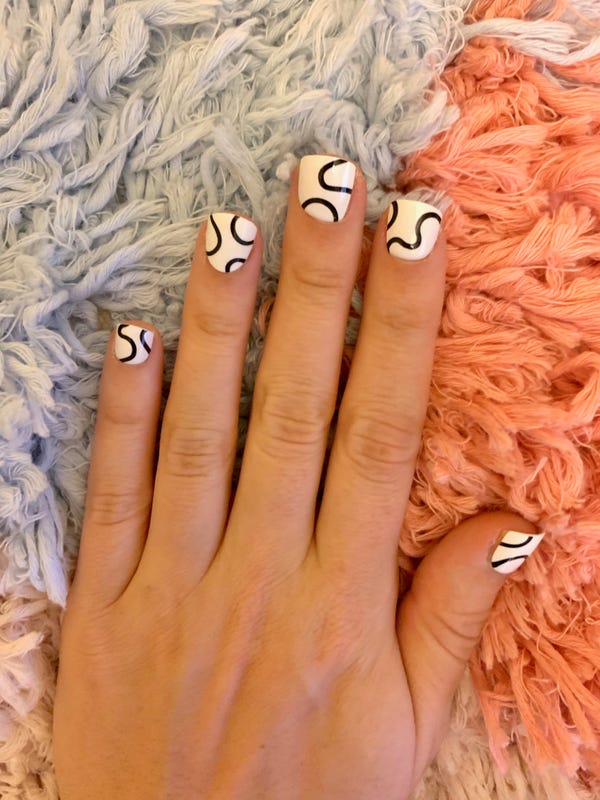 I used the Chillhouse-branded tube of glue and followed the kit's instructions, applying a light layer of adhesive on both the design and my actual nail, then pressing the two together.

Despite being extra careful — seeing a "Warning!" note on the instruction packet, which advised against getting glue on the skin — I still wound up with some bits of adhesive stuck to my fingertips and the skin surrounding my nails. The dried nail glue felt similar to super glue, and while it left an uncomfortable sensation, it dissolved the next day.

Aside from the glue mishaps, the application process was foolproof, and I couldn't stop glancing at my newly "manicured" hands.

The Chillhouse press-on nails were an added accessory I didn't know I needed. 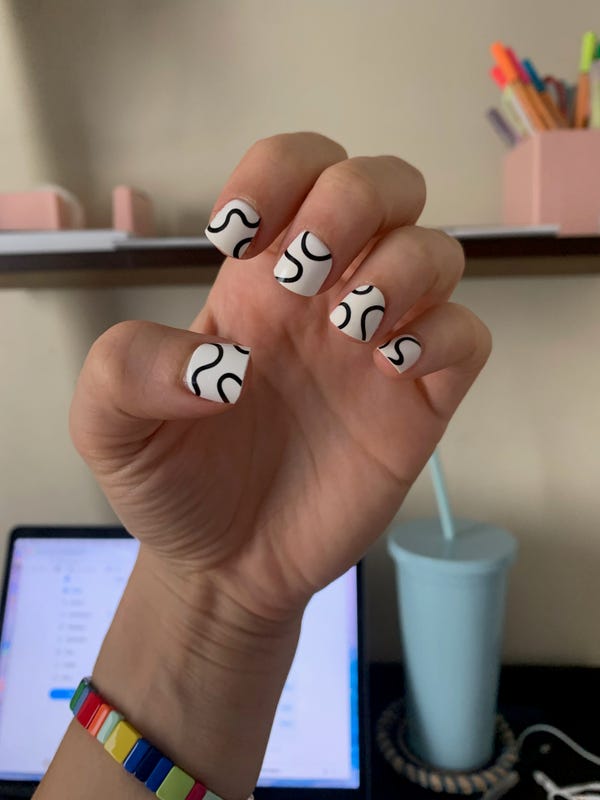 Even while wearing the most simple of outfits, the nails were like wearable art and made me feel put-together, even during a not-so-fashionable day of working from my home "office" (aka the desk that fits perfectly in the corner of my bedroom).

Over the course of two days filled with showering, cooking, typing, and frequent hand-washing and hand-sanitizer usage, the Chill Tips held up without bending or cracking.

This was the first time I had ever worn any sort of faux nails — I've never even gotten acrylic nails at the salon — and I loved how light these felt. I also appreciated that the design never chipped, unlike when I paint my own nails.

I was surprised at how well the nails stayed in place — but no manicure is perfect, and after about two days, they started to peel. 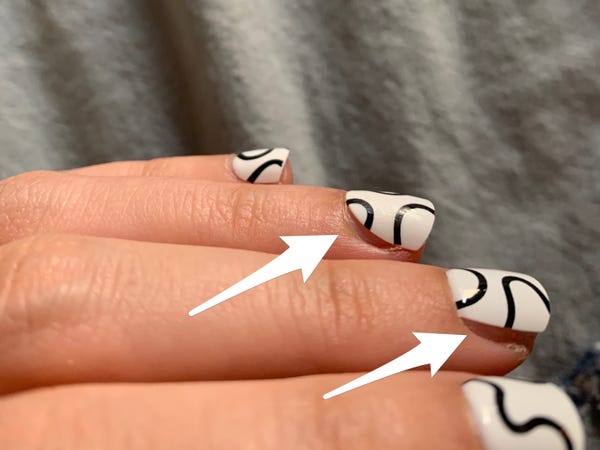 At the end of day two, I noticed some of the designs were gaping around the sides of my nail, which may have been because I didn't use enough glue in some areas.

On my third day of wearing the Chill Tips, I woke up with a few of the nails in my bed.

While the Chill Tips kit recommends not forcibly peeling any of the press-ons, and instead suggests soaking nails in acetone to help remove the designs, I got impatient and took them off myself. This wasn't especially painful, and as a bonus, the Chill Tips are reusable, so they can be saved for another DIY manicure.

The next week, I attempted another manicure with a set of light-pink nails from Amazon. 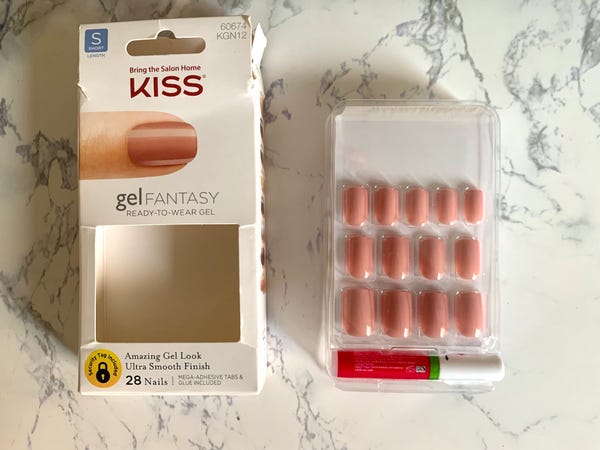 For my next foray into faux nails, I tried a set in a more neutral color that's closer to something I would typically get at a salon.

The Kiss Gel Fantasy Ready-To-Wear Gel press-on nails from Amazon, which are around $12 at the time of writing, came with 28 pieces and a tube of glue.

Using my own clippers and file, I shaped and trimmed each nail piece and felt like a press-on pro.

From afar, I thought the pieces of pink plastic looked pretty similar to gel nails I would get at the salon for upward of $40. 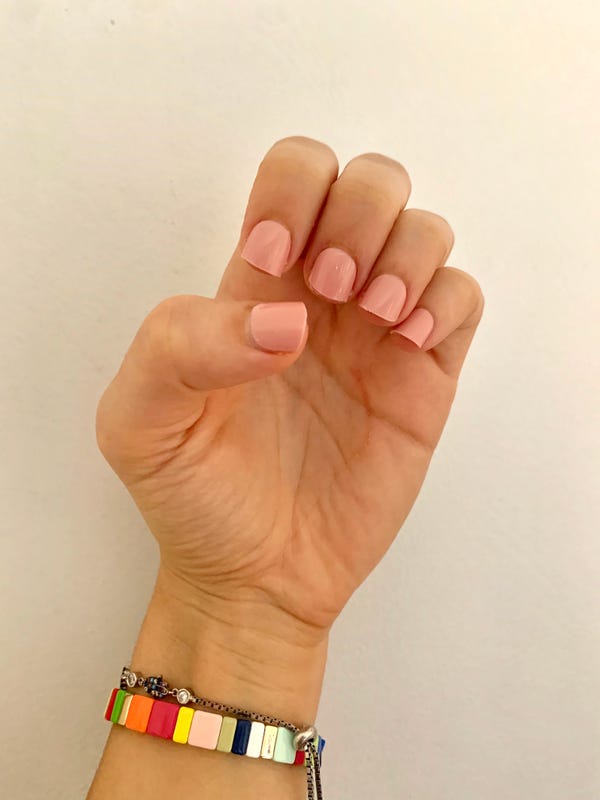 I was most surprised at how nonintrusive the press-on nails felt while I wore them.

Just like the Chill Tips, the Kiss nails didn't feel any heavier than a typical gel manicure.

The downside of press-on nails is that, well, they fall off — and usually in random places. 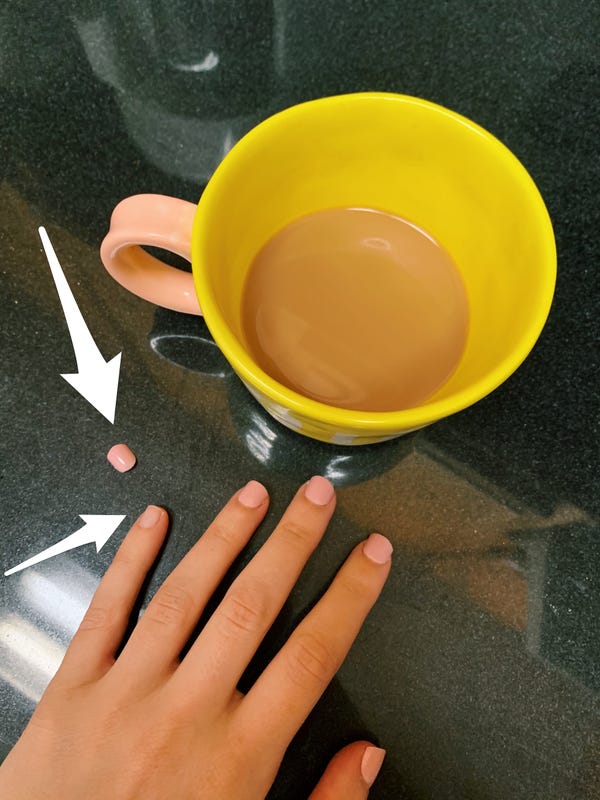 I had a great full day with my pink manicure before I started to find the fallen pieces sprinkled around my apartment, from my kitchen counter to my bed.

In another instance, I watched one of the press-on nails somehow fall directly into a storm drain while I was carrying bags of groceries from Trader Joe's.

But I found some tricks that enhanced my experience — like using cuticle oil before and after wearing the press-ons. 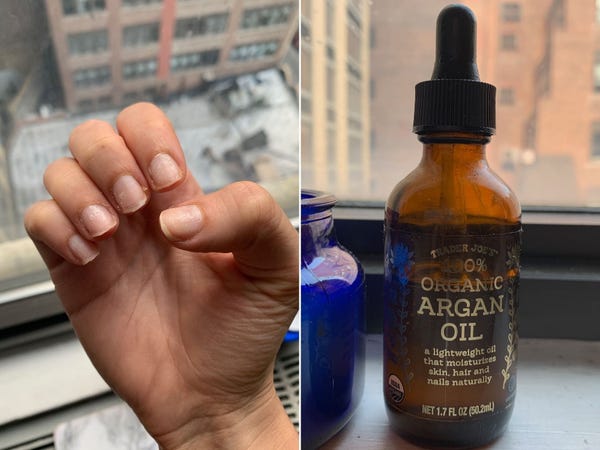 Last year, I spoke with professional manicurist Mabelyn Martin, who told me that using a natural oil — argan oil, sweet almond oil, or jojoba oil — on the cuticles and fingernails regularly can make a significant difference in their health and moisture.

I found this tip to be especially useful with the press-on nails.

With the press-ons, I wasn't damaging my nails with acetone or what can be sometimes-harsh salon removal gel polish methods, but the pieces did leave some glue on the surface of my nail and left my surrounding skin feeling pretty dry.

Thankfully, a trusty bottle of argan oil from Trader Joe's did the trick and brought my nails back to life after I removed the press-ons.

Another press-on pro tip: don't skimp out on trimming and shaping the nails before application. 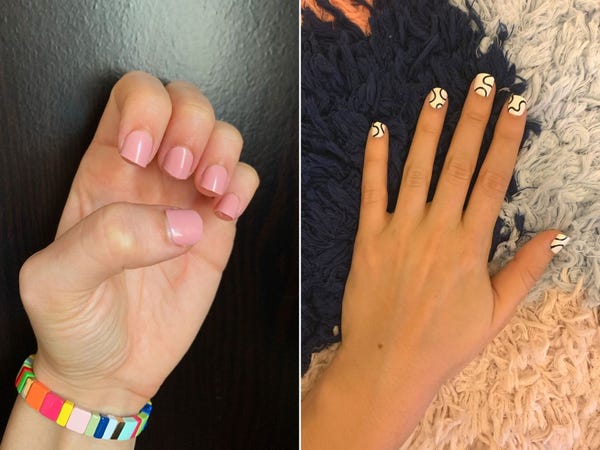 While carving out 30 to 40 minutes to file and clip each piece to the shape of my real nail was a commitment, I think it made all the difference in making my polish-free manicure look as realistic as possible.

For less than $20, press-ons are a fun, easy way to experiment with nail art and emulate a manicure without the hassle of normal polish. 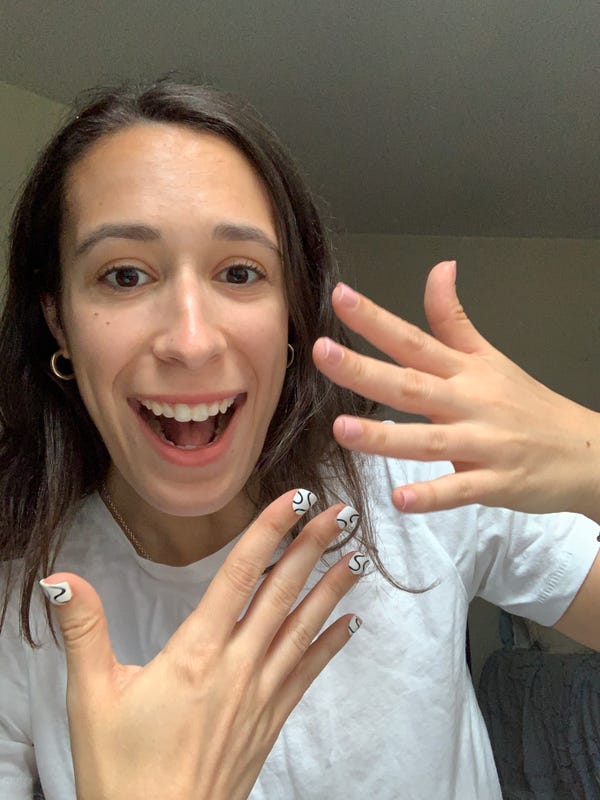 In my opinion, nothing will stack up to the carefree experience of going to a salon for a manicure and leaving with expertly cared-for nails.

But I think there's also something to be said about achieving streak- and chip-free nails at home for a lot less money — and without having to actually paint anything.

It remains to be seen if the hype around press-on manicures will outlast other quarantine-centric beauty trends, but one thing's for sure: If you see me around with a perfect set of nails for the next few months, you know my secret.

Related posts:
Sergio Reguilon at Tottenham training ground for medical ahead of £25m transfer from Real Madrid in blow to Man Utd
Sienna Miller Splits From Lucas Zwirner, Ends Engagement
Popular News
World’s poshest Christmas crackers are covered in SWAROVSKI crystals
01/10/2020
Stuart Broad builds up to second Virtual Test with Sri Lanka
26/03/2020
Bindi Irwin Made Last-Minute Changes to Her Wedding Due to Coronavirus Lockdown
26/03/2020
Widow on The Repair Shop leaves viewers sobbing
26/03/2020
Coronavirus lockdown: Global quarantine reveals weird fact about humanity
26/03/2020
Recent Posts
This website uses cookies to improve your user experience and to provide you with advertisements that are relevant to your interests. By continuing to browse the site you are agreeing to our use of cookies.Ok