On Tuesday something funny happened on the way through the Tuileries.

At one end of the Grand Allée — the vista stretching from the Louvre and the I.M. Pei glass pyramid on one end to the obelisk of the Place de la Concorde on the other, leading up the Champs-Élysées to the Arc de Triomphe and further to La Défense and its own Grande Arche — a new monument of sorts had materialized. Blocking the view from either end, the giant white tent appeared like a beached behemoth, dominating the landscape.

A single word on the front justified its position: Dior.

Prepandemic there were always fashion week tents in the Tuileries. But they were historically relegated to the fringes, so as not to interrupt the flow of human traffic, or to get in the way of the sweep of history represented by this particular view. Not any more.

As a metaphor and a bid to be part of the power continuum, it doesn’t get much clearer than that.

Outside the tent, screaming hordes clogged the entire dirt-covered courtyard, squeezing past any attempt at social distancing and trampling all Covid protocols, fighting to catch glimpses of Jisoo from the South Korean girl group Blackpink, a Dior ambassador. Guests glanced nervously at one another.

Was this a step forward, or back? 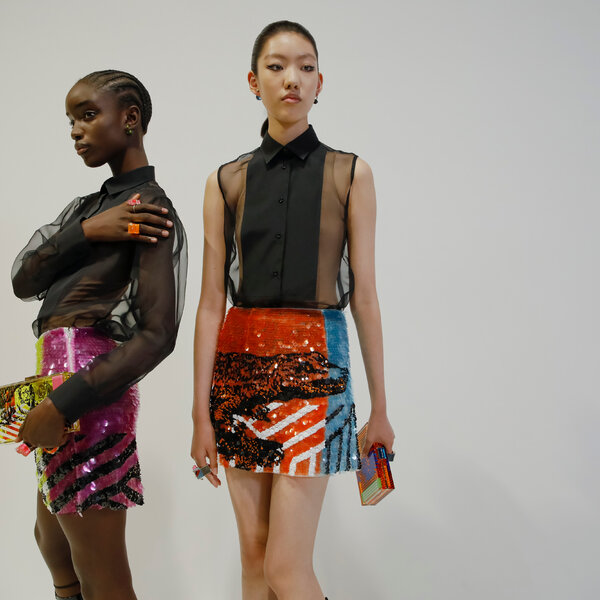 That’s the question of the moment in fashion, as in pretty much everything, especially after an Italian season in which many brands seemed to have been cryogenically frozen.

At first glance, the effect was deeply retro, except that previously Ms. Chiuri had been stuck in a Bar jacket loop — and that particular garment dates to 1947. So this was actually a kind of liberation.

As was the fact that the designer put both her sheer tuxedo shirts, paired with vinyl minis splashed with graphic representations of toile de Jouy jungle cats, and her bright organza evening dresses over nude bodysuits, rather than leaving them to flash the breasts or underwear beneath.

Ms. Chiuri has defined her tenure in part by a focus on sometimes excruciatingly obvious, slogan-dependent feminism, but this was one of the more authentically feminist gestures she has made. Like the sly comment on fashion implicit in the set by the 85-year-old Italian artist Anna Paparatti that framed the show and was titled “The Game of Nonsense,” it represents progress.

(The brief segue into silk boxing shorts and bra tops, on the other hand, felt like a knee-jerk nod to the athleisure-forever litany of the pandemic. Even if it is true that everyone has probably felt the desire to hit a punching bag once in awhile.)

Meanwhile, moving in the boudoir direction: Koché, where the designer Christelle Kocher added a nightie edge to her signature combination of opulence — she is also the artistic director of the couture feather specialist Maison Lemarié — and athletic wear via spun-sugar sequined pajama sets and board shorts, with organza pants and coats lined in nylon mesh. It made sense — she was introducing a limited edition unisex collaboration with Tinder, after all — as did the layers of Asoke striped separates swishing silk fringe, prismatic checks and easy geometry by Kenneth Ize, suggesting the promise of brightness ahead. And at Courrèges, new designer Nicolas Di Felice thankfully eschewed the most hackneyed space-age references for the occasional silver thigh-high boots, architectural outerwear and sleeveless cocktail dresses, one panel flying out like a flag.

But then came Saint Laurent. The designer Anthony Vaccarello set his show, as pre-Covid, at the base of the Trocadero at sunset, with the Eiffel Tower soaring upward like an exclamation point (and another implicit demonstration of power) just across the Seine.

Models tottered forth on a temporary concrete runway that had been doused in water for no apparent reason, wearing platform Tribute heels with stilettos so high they looked more like spindles. There were big-V-neck blouson dresses with battering ram shoulders; bodysuits with halter or bandeau or half-bra tops; high-waist denim flares with cropped jackets and leotards; more bodysuits; and sheer camisoles speckled with rhinestones atop taffeta evening skirts.

The lips were crimson and the sunglasses were dark. The clothes were black, white and red with the occasional flash of bright purple, orange or blue. There were roses, and rose prints. Sometimes a turban. Leather gloves. Bags tucked into the waistbands of belts. And lots and lots of chunky gold jewelry.

The reference was, according to the show notes, Paloma Picasso, an original YSL intimate and woman of great “independence of spirit.” You could see it in the shoulders and the shades, the jewelry and the denim, which were undeniably cool. Mr. Vaccarello has a sharp hand with a jacket.

Those spandex sausage casings, however, served mostly to reveal every bone in the bodies of the starved-looking models — even in the bodies of the street-cast older women involved. (Note to designers: Two older models out of many reads more like a stunt than inclusivity.) The shoes were so high, you could practically see the clenched jaws, and the wobbles. Rather than suggesting confidence, they telegraphed jitters, and the idea that women are merely subject to a designer’s whim. It became increasingly painful to watch.

Mr. Vaccarello has been adept at treading the very fine line between unapologetic, even transgressive sexuality and sexism since he joined Saint Laurent in 2016; at seductively flirting with the Helmut Newton vibe. Lots has been said recently about how sex is back. But this looked more like exploitation than emancipation or empowerment.

It’s the wrong place to be.