The comments began on social media, as they usually do.

Women who had bought a Brandon Blackwood purse and patiently waited weeks for it to arrive, were disappointed. The purses, part of Mr. Blackwood’s latest collection, were either falling apart or arriving in less than optimal conditions.

In June, Fatima Henry, 25, posted a photo of her small, square Black purse with an oil-slick-green snakeskin stripe in the middle to her Instagram account. At the front of the purse, where the company’s name is usually placed, silver letters read: “END SYSTEMIC RACISM.” It was the Brandon Blackwood best seller, the ESR tote. She called it an expensive but cheaply made purse.

Mr. Blackwood, 29, designed the purse in 2020, at the height of the civil unrest triggered by the murder of George Floyd. Profits from the sale of the tote were donated to local nonprofits.

“What else as a Black person are you going to make?” Mr. Blackwood said during an interview in his Brooklyn home. “Black people are literally being murdered in the street.”

The unrest of 2020 has caused consumers to be more conscious of how they spend their money. Consumers have turned to brands that value gender, financial and racial equality, like Telfar and Brandon Blackwood.

These brands have seen significant financial growth in the last year and plenty of attention from a fashion industry that is frantically hoping to align itself with similar values. And that growth can cause issues for a young brand that is not used to meeting the demands of a large number of customers. 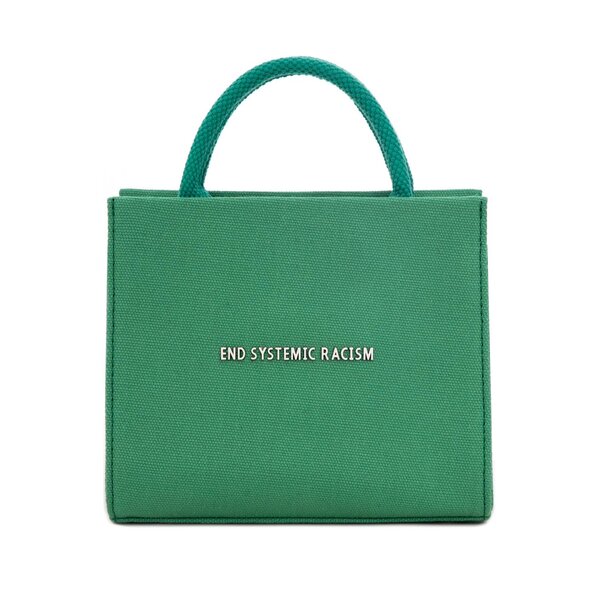 Mr. Blackwood saw the complaints and immediately made a video to respond to the criticism. He posted it on the brand’s Instagram account, without running it by his publicist.

“A lot of you who have my bags know the quality is there,” Mr. Blackwood said in the video, while wearing a skin tone chin band meant to keep his face from swelling after surgery to remove lymph nodes.

“Us Black-owned brands are held to a standard that is sometimes impossible, where everything must be perfect and we cannot be associated in the same lane as these bigger conglomerate brands,” he said in the video. “That’s because we’re far and few in between. We don’t really exist in the market and when we do exist in the market we must be the best, we cannot have one problem. I understand that burden.”

In the last year, the Brandon Blackwood brand has grown significantly, partly because of the popularity of the ESR tote. Before that tote, the company had modest, but healthy, sales; in the last 12 months, the company said, it has sold 10,000 purses. They are often found at resale sites like Poshmark and Tradesy, sometimes at three times the retail price.

The issues Mr. Blackwood and his customers are dealing with aren’t uncommon, according to Chris Ventry, a vice president in the consumer and retail practice of SSA & Company, a global management consultancy.

“With such tremendous growth, there is a rush to utilize different, enhanced manufacturers,” Mr. Ventry said. “As a company grows, there’s a need to bring on sometimes a different side of the brain — in this sense, product development personnel or someone with a true understanding of manufacturing and quality control. That sometimes is not the designers area of expertise, it’s the expertise of someone else in the business.”

Many of Blackwood’s customers who received purses that were not as described have committed to continuing to support the brand, even with their tainted first experience. While Ms. Henry was surprised at the state of her purse, she has shrugged the incident off.

“It definitely wasn’t what I anticipated, it just didn’t match the online description,” Ms. Henry said, adding that she reached out to the company and received an apology and a full refund for the bag within 24 hours.

“I definitely want to allow them some grace because a lot of companies mess up and I just don’t feel like it’s a good idea to just blackball one company, especially a Black-owned company, just because of one mistake,” Ms. Henry said.

Mr. Blackwood considers the ordeal a “blessing in disguise.” He is learning as he goes, and he is in the thick of it now. It was not that long ago that he realized that fashion was not simply a hobby, but a passion.

As a child he often tiptoed into his mother’s closet to collect the ratty T-shirts she wore to clean the house. He would cut them up and then dress his cousins in his creations for a living room fashion show.

“My whole family would have to come into the house and watch the whole thing,” Mr. Blackwood said.

While he was playing dress up with his cousins, his mother, Carleen Haughton, 54, who immigrated to Brooklyn from Kingston, Jamaica, at 16, expressed her expectation that Brandon, her firstborn son, would pursue a profession in the sciences.

“In the articles, it always says we expected a doctor or lawyer, but no,” Ms. Haughton said. “I know Brandon is extremely intelligent, he is extremely brilliant, and he doesn’t have to study hard. Things come easily to him so, of course, he’s going to go into sciences.”

“The brain is just like the craziest organ,” Mr. Blackwood said. “I was super into that.”

During the school year, Mr. Blackwood tried to meet his mother’s goals for him but during his spring, winter and summer breaks, he worked on his own dreams. He interned at Elle magazine one year and at Nylon the next.

“I would tell my parents that I’m doing the science thing for my 9 a.m. to 9 p.m., and they asked no questions,” Mr. Blackwood said. “They were happy and I was really taking Valentino back to the showroom, or sorting through racks and stuff, and nobody knew.”

Buoyed by confidence from his internships, Mr. Blackwood took on another major in his senior year, in fashion. His 141-page thesis, “Feel Like a Woman, Wear a Dress,” was about the iconic wrap dress by Diane von Furstenberg.

At graduation, as Mr. Blackwood walked across the stage to collect his diploma, an announcer read his name and the title of his thesis to the audience, including his mother and most of his family.

“On his graduation day, the whole family’s there, everybody, because he is the first grandson to graduate in the U.S. And I’m like, ‘What is this? ‘Feel Like a Lady’?’” Ms. Haughton said, unaware until then that he had picked up the fashion major. “So I’m just looking across at him like, What is this?”

In 2015, Mr. Blackwood moved into a three-bedroom apartment in Brooklyn that he shared with a few college friends. He got a job at Crossroads Trading, a thrift store where people sell their gently used clothes, making $10 an hour.

It was then that Mr. Blackwood was inspired to make his own purse. He found a manufacturer and posed as a designer looking for someone to make a sample. The sample was for his own closet.

“The amount of people that would stop me and ask me, ‘Where is that bag from?’ I would tell them, ‘I made this,’” Mr. Blackwood said, eyes closed, smiling widely, his hands proudly on his chest.

In 2015, after a friend who was a writer at Essence magazine encouraged him to create his own line, he saved $3,000 and asked his mother for his belated graduation gift: $4,000. He designed four purses and paid for the samples. He photographed his pieces with friends and showed the photos to his friend at Essence, who made sure the purses were in the magazine shortly afterward, he said. Soon, his bags were also featured in Elle.

“The brand was kind of making money, but it was not enough,” Mr. Blackwood said. “I wasn’t making me money. I was only making money to make more product.”

Mr. Blackwood got a job at a high-end jewelry store in Manhattan. While he was selling gems, his brand was slowly becoming more popular. On his breaks, he would run to the post office to ship bags. Between the brand and his day job, he began to lose friends.

“I didn’t have anyone to talk to,” Mr. Blackwood said. “I wanted to be at the bar and do all that stuff too, and I couldn’t.”

Whenever people ask Mr. Blackwood what was his biggest sacrifice for his brand he says: “I lost my 20s.”

There were other hurdles. When he contacted stores and buyers to see if they would carry his designs, they said no, he said, and sometimes gave inconsistent excuses.

Everything changed when Mr. Blackwood created the ESR tote. His Instagram following went from close to 30,000 to over 300,000.

He discontinued the ESR tote after a year, saying he wanted to do so while it was at its peak, but his fans stood by him, waiting — sometimes demandingly — for the release date of his next collection.

His latest ad campaign for his May collection featured a range of celebrity models including Saucy Santana, a gender fluid rapper from Miami, and Halle Berry, Doja Cat and Joan Collins. The orange mini Kendrick bag even got its own close-up in the rapper Saweetie’s music video for “Fast Motion.”

“The brand was always getting bigger and bigger and there was a point where I was fully sustaining myself off the brand alone, and that was fine,” Mr. Blackwood said. “But now it’s like a whole different thing.”